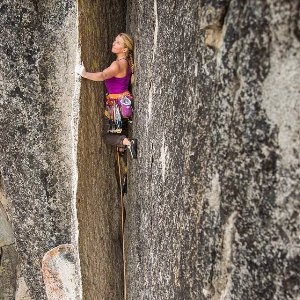 Harrington is a professional rock climber and adventurer who has been a prominent and leading figure in the climbing community since she was a teenager. She is perhaps best known for her five-time National Championships, two-time North American Championships, and numerous podiums on World Cup circuit. Harrington has excelled at nearly every aspect and discipline of climbing. She’s reached the most elite levels in the gymnastic and physical discipline of sport climbing, free climbed 2500-foot big walls in remote corners of the world, won ice climbing competitions, and summited Mt. Everest.

However, her true passion lies in exploring remote mountain ranges across the globe. In the fall of 2014 Harrington was one of five members of The North Face/National Geographic team that traveled to Myanmar (formerly Burma). A country just recently open to foreigners after a brutal history of ethnic strife, political upheavals, and human rights violations, Myanmar’s struggle is well known as one of the longest running civil wars which the modern world has ever seen.

“We’ve had a glimpse into Emily’s show and her tale is absolutely amazing,” accordingly to Brendan Madigan, owner of Alpenglow Sports. “She’s continually pushing the ceiling of possibility not only in women’s climbing, but in the sport as a whole. I don’t know of another athlete who excels at all disciplines and has the ability to weave their adventures into such a compelling tale. Her story is not to be missed.”

Harrington’s ultimate objective was to journey 700 miles overland from the southern city of Yangon north via various modes of transport, including bus, train, boat, and motorcycle. From there her team embarked on a grueling 250 mile trek on foot through the dense, remote jungle in order to reach the Tibetan border and the base of 19,000-foot Hkakabo Razi, the presumed tallest peak in Myanmar.

Previously, Hkakabo Razi had only been summited once, in 1996. In August of 2014 a Burmese team possibly reached the summit but went missing upon their descent. Due to the incredibly remote and mysterious circumstances surrounding the peak, its actual height had never been measured.

The team’s goal was to successfully reach the summit via a new route on the West Ridge and accurately measure its height using GPS equipment for National Geographic.

Along the way, the team encountered terrifying obstacles and mental and physical suffering beyond the scope any of them had experienced before. It was a journey beyond the scope of imagination: unpredictable, wild, and completely life-changing.

Amazing raffle prizes from generous sponsors La Sportiva, The North Face, Petzl, Smith Optics and Goal Zero will be on hand with 100% of proceeds to benefit Tahoe Institute for Natural Science. Please come early for drink specials and good seating. The show begins at 7pm. Please call Alpenglow Sports at 530.583.6917 with questions.