Where is Tahoe Paradise? 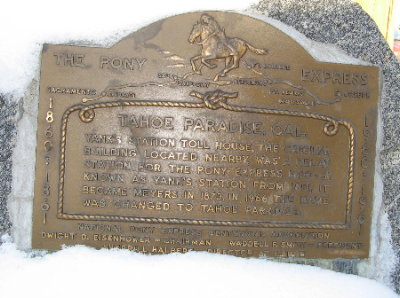 Is Tahoe Paradise a state of mind or an actual location?

We found a clue out at the old Pony Express Trail Marker in front of Lira’s Market.

“Yank’s Station Toll House, the original building located nearby, was a relay station for the Pony Express, 1860-61. Known as Yank’s Station from 1851, it became Meyers in 1873. In 1966, the name was changed to Tahoe Paradise.”

If you don’t believe us, go check it out for yourself. And, if you know more about the Pony Express running through South Lake Tahoe, let us know.

Bike riders know it continues through TAHOE PARADISE up the Old Meyers Grade (or is it Old Tahoe Paradise Grade…) and down to Ice House. The XP trail is an absolute blast if you like a fast, rolling trail through old growth trees along the beautiful American River.