Located next to Boreal ski resort is a treasure trove of California ski history. The Western SkiSport Museum was developed as an exhibition of Western North American ski history in 1969. The history of California skiing and legendary mailman, Snowshoe Thompson, who carried a 80 pound mailbag on skis over the Sierra Nevada mountains while rescuing stranded miners in raging blizzards are key exhibits. […] 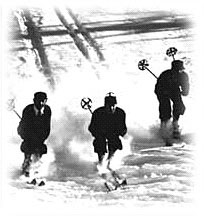 Skiing in California really started with the Gold Rush of 1849. Local miners living in Truckee used “long boards” to travel over the snow. When too much snow kept them from working – an issue that still plagues today’s ski bums! – the miners passed the time by holding downhill races with other camps.

As camp rivalries spread, a racing circuit was established. Each camp had its “aces” who rode the 14 foot boards all out for the honor of their camp. The first recorded downhill racing in the US took place in LaPorte, California and other local mining communities in the mid-1800’s, straight downhill racing on fourteen foot boards helped pass the long winter days.

Recipes for “doping” [waxing] were highly guarded secrets and often determined who would win or lose. Prizes of silver belt buckles and cash were common. Betting was intense; spirits were high; and après ski revelry could last through the night. These early California competitions took place 15 years before the first European tournament.

The mining camps organized into various clubs with rules of conduct for race events. The Alturas Snowshoe Club of La Porte claims to be the oldest competition ski club in the world, since the world’s first downhill races were held on their Lexington Hill in 1866.

By 1910, Truckee, California had a jump, toboggan chutes and a ski hill located on Hilltop, at present day Cottonwood Restaurant. As a means of making money, the Southern Pacific Railroad established Truckee as a destination. Visitors from San Francisco and Oakland arrived by train and stayed in Pullmans which were parked on a side track. The trains were equipped with special baggage cars converted into a ski shop or stripped for dancing. These “Snowball Specials” rolled until the start of World War II.

By the late 1920’s ski clubs began to appear up and down the West Coast. Skiing was a new sport and thousands traveled to the snowline on roads not open in winter. Ski Jumping was the daredevil sport of the period and ski clubs hosted huge spectator events. In some cases the ski clubs took the snow and jumping to the cities-hosting events in Berkeley, Treasure Island in the San Francisco Bay, and the LA Coliseum. The ski industry began to develop from small club-operated hills to ski areas with the opening of Sugar Bowl in 1939. 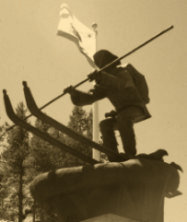 To learn more about the history of California skiing, stop by the Western SkiSport Museum. Free Admission, but please consider making a donation.

Look for the statue of Snowshoe Thompson.

Open Friday, Saturday and Sunday during the ski season, and by appointment during the off-season.

Story contributions by the Auburn Ski Club, and the History of California Skiing.