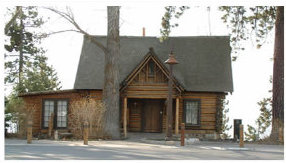 The Watson Cabin still stands on the original site where the Robert Montgomery Watson built it in 1909, and remains an outstanding example of turn-of-the-century construction. It is the oldest building in Tahoe City that still sits where it was built, in the heart of Tahoe City, above Commons Beach, and is listed on the National Register of Historic Places.

The first residents of the Cabin were Watson’s son Robert, his wife Stella and their daughter, Mildred. While the cabin is a testament to the simplicity of pioneer life, it was one of the first in Tahoe City to have indoor plumbing! Originally, the cabin contained a living room, kitchen and an outdoor porch. Upstairs there were 2 bedrooms, a sewing room, and amazingly, indoor plumbing in the bathroom! Eventually, the outdoor porch was extended and enclosed to make room for the family of three who for many years lived here year ‘round.