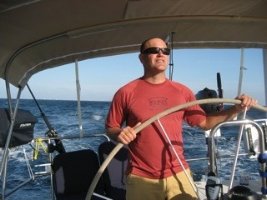 Todd takes full advantage of the endless recreation and adventures located out his front door year round in North Lake Tahoe.

Whether skiing backcountry, at the resort or on the groomed skating trails in the winter, or mounting biking, hiking and sailing competitively in the Monday night Laser fleet, Jackson keeps himself active.

His passion for fitness and Lake Tahoe has also landed him at the helm of two successful businesses including Adventure Sports Week Tahoe.

Todd Jackson is the owner of Big Blue Adventure and Seventh Wave Productions, and lives and works in Kings Beach on the North Shore of Lake Tahoe.

Raised in Ann Arbor, Michigan, Jackson moved to the West Coast in 1980, attended the University of California at Berkeley, obtained a degree in liberal arts and had lived in the Berkeley until moving to the Lake Tahoe area in 2003.

“I love living in Tahoe,” Jackson said. “It’s an amazing place that has a lot of soul.” “Living alongside this beautiful lake in the heart of the Sierra is hard to beat.”

As the Executive Director of Big Blue Adventure and Seventh Wave Productions, Jackson focuses on producing participatory sporting events. “I’m involved in all aspects of the companies and have enjoyed gaining experience in so many aspects of business.”

Todd has been active in the Tahoe/Truckee area serving on various committees, networking and producing events such as the Donner Lake Triathlon, XTERRA Tahoe City, XTERRA Lake Tahoe, and the Tahoe Big Blue.