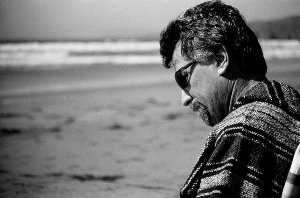 Many of you know Bruce Rettig from his award-winning advertising campaigns and design. But did you know he’s an accomplished author?

The 2012 issue, entitled SHACKLED, is their 43rd edition and “represents the best cutting edge creative and experimental writing from the West Coast and beyond.”  SHACKLED is now available on Amazon.

What images and feelings does the word shackled conjure for you? For many, shackles reify the torturous act of being confined, punished, manacled and oppressed; yet to others, they manifest a means of intensifying desire. In this provocative issue of PacificREVIEW, the writers share the paradox of our physical, spiritual, mental, sexual, political and social shackles that can also spur creative liberation.

Bruce Rettig is the author of literary short stories, essays, and flash fiction. He graduated from the University of Colorado with a Bachelor of Arts degree in Fine Arts and Fine Arts History. In 2004 he was an Honorable Mention Winner in the XVII Consecutive New Millennium Awards for “All Wired Up and No Place to Go.” In 2003, his short story, “Storm Door,” was the winner of the Peralta Press YK3 Contest for Best in Fiction. He’s completed his first novel and is now working on a second.

Bruce lives at South Lake Tahoe, California, and works full time at his advertising agency, Charter Advertising during the day and writes fiction at night. He continues to enjoy the creative process and is one of the founding members of Tahoe Writers Works and is publisher of its literary publication, EDGE. He helps support various arts and culture groups in the Lake Tahoe area including the Tahoe Tallac Association and their cultural events program at the Tallac Historic Site. Bruce enjoys living and playing in the beauty of the high Sierra with his wife and three children.