The Romancing of Tahoe by Paul Bailey

His charming depictions of outdoor activities and use of striking, bold colors will make you fall in love with his vintage Tahoe posters.

Read More… from The Romancing of Tahoe by Paul Bailey 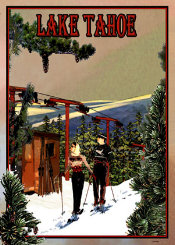 Paul has captured the romance of living in the mountains through his watercolors of nostalgic mountain scenes and lifestyles set in the 1930’s – 1950’s.

While his arrangements and use of light may be simple, they portray typical mountain culture and values, and life’s pleasantries.

They are intentionally made to be wholesome and simple. Like our life in the mountains. 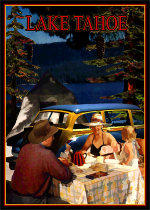 Besides the leading galleries in Tahoe and Truckee, you’ll find his vintage posters in the strangest places. Like McDonalds in Truckee.

Bailey has been a painter and art designer for more than 30 years and is a native Californian. He learned his skill from his parents who taught him graphic art, watercolor and pastel as a child. He later went on to art school, adding studies in architecture as well.

This combination has enriched him with a unique ability to create depth and dimension, bringing the viewer to appreciate the realism of his paintings. 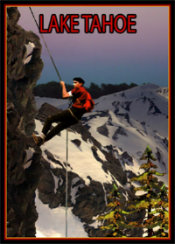 He has worked in many mediums, but has primarily focused on watercolor and pen-and-ink. His popular vintage posters begin as a watercolor.

One thought on “The Romancing of Tahoe by Paul Bailey”