Home » Blog » Outside » Mountaineering » The Push, A South Pole Adventure for Adaptive Athletes

The Push, A South Pole Adventure for Adaptive Athletes 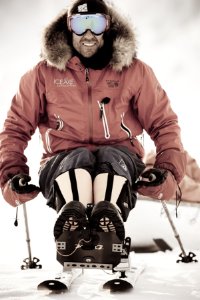 It’s a first for adaptive athletes who literally pushed the limits and themselves. Grant Korgan, lead by Tal Fletcher and Doug Stoup, made it to the South Pole on January 17, 2012 on the 100-year anniversary when Captain Robert Falcon Scott’s Terra Nova expedition reached the earth’s most remote spot.

The expedition originally included Grant Korgan of Lake Tahoe, a world-class kayaker and adventurer and John Davis, a two-time Paralympic gold medalist.  Both Davis and Korgan are athletes with spinal cord injuries.  Unfortunately Davis sustained an injury while training in South America that took him out of the bid for the South Pole, but he was there in spirit.

As he literally pushed himself 100 miles across the frozen Antarctic landscape, Korgan demonstrated the capacity of the human spirit to overcome life-altering injuries. And, perhaps more importantly, the team hopes to inspire people in all walks of life to help others achieve the seemingly insurmountable, to push their own everyday limits, and to live up to their ultimate potential. 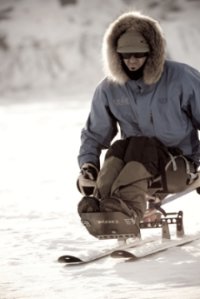 Using custom-designed Nordic skis and sheer upper body strength, the specially crafted sit-skis will revolutionize the way parathletes participate in winter sports. The gear was as important as their technique, endurance and determination.

The expedition was lead by Doug Stoup and Tal Fletcher; they were accompanied by a three-person production crew. The team trained for a year with various missions in Alaska, Norway, Lake Tahoe and South America. The overall purpose of the project is to make strides for spinal cord recovery and to support California-based 501c3 non-profit High Fives Foundation, which helps adaptive winter athletes ideally get back on their feet and to their sport.

“My bones [were] clacking against each other. And you really can view this thing in any way you want,” Korgan said. “When I realized that I could see the beauty in any and all things, it brought another level of freedom.” Grant Korgan

It has always been Korgan’s goal to evolve from his sit-ski to stand and ski the last bit of mileage to the south pole. It was so cold and intense that until the last day, it didn’t look likely.  Korgan said it will be remembered as the greatest moment, second to his wedding with Shawna Korgan, who surprised him a quarter mile before the finish. “The Push” was streamed through live satellite calls daily from Antarctica in collaboration with SocialTyze, which can be viewed on Facebook Page “The Push: A South Pole Adventure.” It will also be featured as a full-length film in late 2012 and as a four-part television series on NBC.

Click here to learn more about The Push and High Fives.