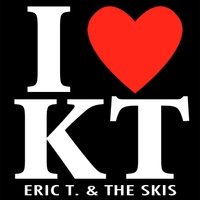 Over thirty years after modern ski music was born with the release of his 1985 vinyl EP, titled “Ski Patrol”, local Tahoe-based snow reporter, entrepreneur and musician Eric T. Brandt, aka: “Eric T.” has released a new single, “I Love KT”.

The high-energy, hard-rock track was produced as an anthem for the worldwide ski and snowboard community that cherishes and worships the slopes of Squaw Valley’s renowned peak, KT-22.  “I wanted to give Squaw Valley and KT-22 their own tune reflecting the incredible and ever-growing tribe of skiers and snowboarders that refer to KT-22 as “the mothership”.

‘Every mornin’, it’s always the same. The mothership is callin’ my name’, go the opening lyrics. The song also references the ongoing changes at the resort with lines like ‘as everything changes, it stays the same’ referring to the idea that while there will always be changes, “the mountain itself, which is the core attraction, remains intact.”

A long time Squaw Valley skier, Brandt, former Director of Marketing at the resort, and a local entrepreneur, (he opened the Squaw Valley bungee tower in 1992 and now runs the Squaw Valley Visitor Channel), shares a strong, personal love for the mountain. “It’s really a centerpiece in my life; the people, the mountain, the whole scene is one of a kind,” says Brandt. “I’ve spent the majority of my life here and really do love it!”

Brandt’s development of ski music began in the early 1980s while working in Malibu, CA. with Surf Punks’ producer Dennis Dragon. “Having roots in Tahoe, I loved skiing, and felt that as surfing has surf music, skiing culture deserved its own genre.”  His release of the EP “Ski Patrol” in 1985, and the 2005 reissue CD “Ski Patrol Revisited” featured novelty songs “about the ‘fun, good people, and good times that draw us to the snow.”  His efforts led to work with Warren Miller, where he produced the title songs for three of Miller’s classic 1980 films including “Steep & Deep”, as well as a long tenure with guitarist Don Felder, formerly of the Eagles.

“I Love KT” is available as a digital download on iTunes, Google Music, Soundcloud, and other online music outlets. For additional information, please contact Eric Brandt at 530-386-2860 or erict@skimusic.com.