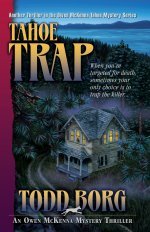 TAHOE TRAP is about a 10-year-old illegal, Mexican, immigrant boy named Paco Ipar. When Paco’s foster mother is murdered, he is left homeless, and, because he doesn’t speak Spanish, without even a country he can call home.

Tahoe Detective Owen McKenna discovers that two contract killers out of Las Vegas are after Paco. McKenna knows that if he does nothing, the men will keep pursuing the boy. So McKenna plans to set a trap for them using Paco as bait. McKenna’s plan carries a huge risk. If it goes wrong, he will be handing the boy to the killers…

Todd Borg is the author of this popular Tahoe mystery series featuring Detective Owen McKenna and Spot, a Harlequin Great Dane who is McKenna’s sidekick.  TAHOE TRAP is Borg’s 10th mystery sure to be another nail biter. Congratulations Todd!

Todd’s books have received rave reviews in many major trade journals and dozens of newspapers and magazines coast-to-coast.

Owen McKenna used to be a cop in San Francisco. His position was Homicide Inspector. A tragic event (revealed in Tahoe Blowup) made him give up the profession (and guns) and move to Lake Tahoe to start over. Owen started his practice as a private detective working out of a rented office space on Kingsbury Grade on the South Shore. 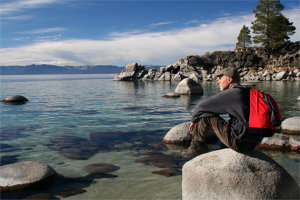 Owen lives with Spot, his Harlequin Great Dane, in a tiny log cabin (500 square feet) that sits 1000 feet above the East Shore. Lake Tahoe straddles the California/Nevada border so that Owen lives on the Nevada side and looks across at the Sierra Nevada mountains in California. He has pretty much the hands-down winner for world’s greatest view.

Todd Borg has won both the Best Mystery and Best Thriller Awards from the Bay Area Independent Publishers Association. His books have been chosen for several Top-5 and Top-10 lists as well as for the Librarian’s Choice Best New Fiction list from the Cincinnati Public Library, and have been featured picks on several prominent mystery web sites such as the famous Poisoned Pen in Scottsdale, Arizona.

Learn more about Todd and Owen at www.ToddBorg.com.