“Tahoe Tales of Bygone Days and Memorable Pioneers,” by Don Lane, USFS recreation supervisor at the LTBMU, is a compilation of Lane’s long running radio broadcasts which aired in the South Shore starting in the mid-1980s. […] 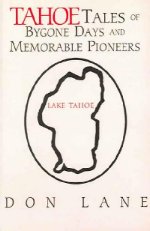 As a USFS ranger, Don knows every inch of Tahoe’s wilderness and back country that helps him set the stage for his fascinating tales.

Whether you hear Don on the radio or read his historical accounts (he calls them tales although they are based on fact), Don’s vivid writing style ignites your imagination and lets you feel the intensity of the heroic episodes of Tahoe’s early pioneers and interesting characters.

Come to think of it…Don deserves his own tale since he definitely fits the bill.

Don has lived in a Forest Service cabin at Nevada Beach for more than 30 years. While Don self-published his book, he is not concerned with making money. Instead, he wants to preserve all of the research he has done, and above all, share it with everyone.

You can find Tahoe Tales at the Gatekeeper’s Museum book store in Tahoe City.