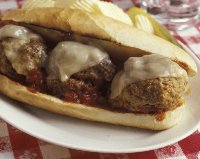 Keeping it real (and simply delicious) are his key ingredients.

In addition to the owner, John Galea.

Tahoe Keys Deli has been open in the Tahoe Plaza since 1984. John started making deli sandwiches on August 31st and he’s still going at it. We think he has the recipe down.

It’s a deli. That’s it. No frills, a few tables inside and out, 1 type of coffee (no additives except sugar or cream)…and without a doubt some of the best sandwiches in South Shore.

Besides the basic subs like roast beef and ham, he’s added a line of special sandwiches like local favorites – the Tahoe Turkey, the BLT, Meatball sandwich (like his Mama used to make…) and 110 Degrees in the Shade (roast beef, pepper jack cheese, Ortega chili, pepperocinis on a hot onion roll), Traditional deli salads like potato and pasta are made daily as well as fresh baked chocolate chip and oatmeal cookies.

Once you meet John, you are his friend for life. It’s a true local hangout next to another old-time local fixture the Clipper Barbershop.

When he’s not making his famous chili or soups, you can find John on the water kayaking or hanging with friends.