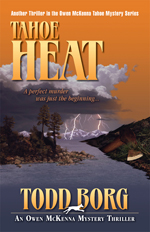 Borg’s books have won the Ben Franklin Award for Best Mystery of the Year, made several bestseller lists, and have received numerous rave reviews in journals and newspapers across the country.

TAHOE HEAT is about a young bio-tech genius named Ryan Lear whose life is threatened when scientists at his company make an amazing high-altitude discovery at the company’s lab on the side of Mt. Rose above Lake Tahoe.

When Ryan Lear hires Tahoe Detective Owen McKenna to investigate, McKenna finds clues to a killer in a message encoded in a piano tuner’s last tuning and in a wild Mustang who is roaming Tahoe’s forests, far from the desert where Mustangs live.

McKenna can’t figure out the meaning of the piano tuning code or the reason why the Mustang is lost, but he realizes that both are connected to a vicious killer who is planning the ultimate revenge…

The mesmerizing Tahoe landscape gave Borg the idea for a series of award winning novels with a detective protagonist who lives at Lake Tahoe. The result was Owen McKenna, an ex-cop with a tragic background who moved from The City (San Francisco) to the mountains to study art and earn a slightly more genteel living as a private detective.  But that didn’t last long.

Masterfully portrayed in his eight mystery thrillers, Borg’s novels cleverly integrate Lake Tahoe landmarks and hot spots, history, local culture and the Tahoe art scene into the plot that add a captivating element for readers who try to literally find the scene of the crime. Borg’s thrillers are not only full of intrigue and suspense, they have become unofficial guide books used by many of his fans to tour Lake Tahoe’s more interesting digs. 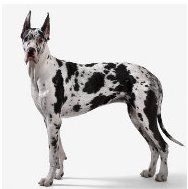 Learn more about Todd and all of his books at www.ToddBorg.com.  And, you can meet Todd in person at one of his talks, readings and booksignings throughout the summer and fall. 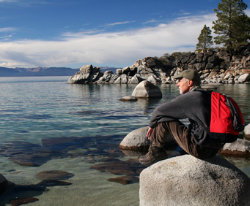