Tahoe beneath the Surface by Scott Lankford 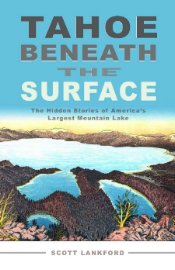 Lake Tahoe transformed America, and not just once but many times over from the earliest Ice Age civilizations, to the mysterious death of Marilyn Monroe. It helped in the American conquest of California, the launch of the Republican Party, and the ignition of the western Indian wars. And along the way, Lake Tahoe even found the time to invent the ski industry, spark the sexual revolution, and win countless Academy Awards.

“Tahoe beneath the Surface” by Scott Lankford brings this hidden history of America’s largest mountain lake to life through the stories of its most celebrated residents and visitors over the last ten thousand years.

“Tahoe beneath the Surface” mixes local Washoe Indian legends with tales of murderous Mafia dons, and Rat Pack tunes with Steinbeck novels. It establishes Tahoe as one of America s literary hot spots by tracing the steps of more than a dozen authors including Bertrand Russell, Maxine Hong Kingston, and Michael Ondaatje.

“Tahoe beneath the Surface” reveals how the lake transformed the lives of conservationists like John Muir, humorists like Mark Twain, and Hollywood icons like Frank Sinatra. It even touches upon some of the darker aspects of American history, including anti-Chinese racism and the Kennedy assassination.

Despite the impact Lake Tahoe has had on America, environmental threats loom large, and Tahoe Blue a term that Lankford uses to encompass the whole range of life, beauty, and meaning the lake represents grows increasingly vulnerable. In “Tahoe beneath the Surface,” human history and natural history combine in a most engaging way, one that will both inform and inspire all who would keep Tahoe blue.

Raised in Colorado, Scott Lankford got lost en route to Stanford University and spent much of the next ten years as a maintenance man, musician, and mountaineering guide at Lake Tahoe. After joining the 1985 American Everest West Ridge Expedition, he completed a Ph.D. in modern thought and literature with a dissertation on John Muir. Currently a professor of English at Foothill College, in California’s Silicon Valley, he has previously served as Foothill’s Dean of Language Arts and was a former co-director of the Foothill College Cultural Diversity Center.