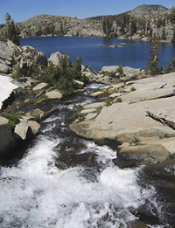 His deep love of the Sierras drives his passions.

Having backpacked all over the western U.S., he believes no mountain range compares to the Sierras. Especially Lake Tahoe.

A 29 year South Shore local, this avid mountaineer is obsessed with being in the mountains. His favorite spot is Desolation Wilderness where he prefers to enter via the Bay View trail “to get in” quicker.

When he’s not trekking by foot or on his telemark skis, you’ll find Mark out on his sailboat all year-round staring at the Sierras he loves. Usually admiring the ski tracks he just laid down in the bowl behind Maggie’s north peak. 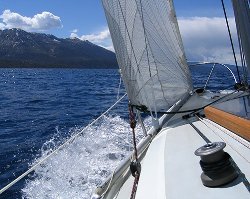 And this sailing shot was the cover shot of the 2006 Lifestyle magazine.

And Mark recently completed a photo shoot for local musician Niall McGuiness and his upcoming CD, The New World Jazz Project, and built his website.