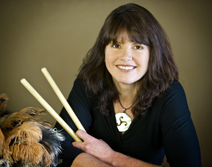 It all started when she was just a little girl.

The beat and rhythm of life filled her blood, overflowing with creativity.

Liz performs her multi-media one woman show “DURGA, Goddess of the Drum” to sell out crowds in theaters and performing arts centers in Northern California and Nevada. DURGA, whose message of Drums Unite Race and Gender Alike, celebrates the story of the drum and acknowledges rhythm as a universal language.  Through her spirited performance, Liz presents the historical and cultural influences leading to the creation of the modern day drum set. Honoring these influences from around the globe while setting an example to young and old of reaching beyond the stereotypical boundaries of race and gender, Liz demonstrates and performs on Native American, Middle Eastern, Afro-Cuban, African and American drums.

Liz, and her drum and dance troupe Java Djembe, have reached thousands in the Reno, Carson and Lake Tahoe area with the message of the drum bringing cultural awareness and education to schools through grants funded by Tahoe Arts Project, Nevada Arts Council, Lake Tahoe Education Foundation, and El Dorado Community Foundation.

Liz is the author of two books: “Djembe 101″ an instructional book, DVD and play along CD, and “Adventures of Durga, Goddess of the Drum” a children’s book.

Through education, outreach, and performance Liz strives to increase awareness of the importance of keeping music in the educational system and will continue to create programs that benefit children, enlighten the community and promote cultural unity.