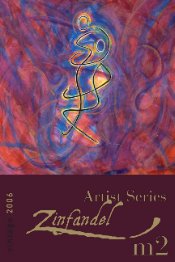 The work of Lake Tahoe fine artist Reds Regan is featured on a Lodi zinfandel which was recently released in June 2008.

Reds will be conducting another live painting performance at the Squaw Valley Art & Wine Festival on July 19 and 20, 2008 in the Village.

“Imagine the kind of bohemian scene like Toulouse Lautrec painting in the streets of Paris,” Reds said. “We’re trying to create a certain energy for people while they’re wine tasting.”

Reds has been performing live painting demonstrations at m2 events over the last six months and the Artist Series Zinfandel release event is the ultimate expression of fine wine combined with fine art. “Art and wine are complementary and both enrich our minds and bodies,” Reds stated. “Why not connect the two to broaden the entire experience?” he said.

m2 winemaker and co-owner Layne Montgomery considers the artist series and live painting performances a competitive advantage for the Lodi winery. “Every winery does tastings, but our winery is offering the public a well rounded cultural experience while they’re sampling our extraordinary wines.” 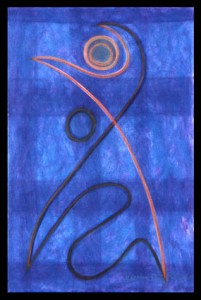 The intensity of Reds’ paintings is rooted in his Irish heritage. He studied Celtic and other primitive art forms while developing his own unique style which is called primitive contemporary. His unique composition and colorful expression create a poetically simplistic yet boldly relaxed style. Reds’ work has been associated with Salvador Dali, Joan Miro and Picasso.

Reds’ signature hand-sculpted frames are unlike any in the industry and integrate the painting and the frame into one symbiotic work of art. His large acrylic canvases, which run as large as 10 feet tall, also stand apart from any other artwork in the world.

Reds has shown his work in galleries and various venues in Key West, Philadelphia, Boston, and the International Art Expo in New York. He enjoys a following of diverse and eclectic collectors from around the world including the United States, Italy, Ireland, Japan and Russia.

m2 is a small producer of ultra-premium wines from distinctive vineyards throughout California. The winery was founded by Layne Montgomery and Chris Matheny who perform all aspects of the business from winemaking to barrel washing. For more information about m2 Wines, visit www.m2wines.com.