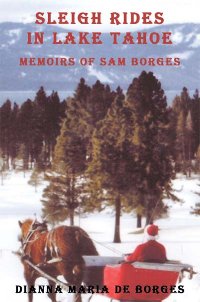 For forty years he was able to relive some of his fondest childhood memories of sliding behind the milkman’s sleigh to the sound of bells keeping beat to a horse’s trot back in Massachusetts.

Little did he know in 1969 that he would spend the rest of his life giving sleigh rides at Lake Tahoe; and be the happiest man on earth.

Sam Borges was the beloved patriarch of the Borges Family Sleigh Rides for forty years, a timeless Tahoe tradition and South Shore landmark.

Sam passed away January 11, 2010 surrounded by his wife of sixty years, Rosie; his four sons, Dean, Dave, Don, and Dwight; and their families.

Over the four decades of hosting locals, visitors and even celebrities in his sleighs, Sam acquired countless stories, memories and fun facts about Lake Tahoe that have been collected by his daughter-in-law Dianna Maria de Borges who wrote “Sleigh Rides in Lake Tahoe: Memoirs of Sam Borges”.

In her book, Dianna shares the endearing stories of a life well lived; one highly regarded for his unflappable dedication to and passion for nature, animals and his fellow human beings.  Giving us a glimpse into his character, stories of his adventures as a young boy traveling across the country with his mother and sister are intertwined with his life at Lake Tahoe raising a family, and starting a business based on his dreams. Sam was also an inventor and loved to work with anything mechanical. In fact, years ago he converted an old Ford Escort into a dually and added a cache of batteries to the trunk making a hybrid before it was a trend.

Sam passed the reins of the Borges Family Sleigh Rides to his youngest son Dwight two decades ago who continues to warm the hearts of visitors and locals with enchanting stories about Lake Tahoe as they dash through the snow listening to the sounds of bells keeping beat to the horse’s trot.

It’s 1967 in South Lake Tahoe, and Sam Borges enters his son’s name in a raffle. The prize is a pony. That winter he starts a Lake Tahoe tradition of delighting neighbors and visitors alike with his horse drawn sleigh rides. For over 40 years, people from around the world have come to dash through the snow, enjoy picturesque views and listen to stories of a land that once echoed with the thundering hooves of Pony Express Riders and the Wild West.

Sam Borges, born in 1924, begins his story when his mother, Aldina, is cured of her blindness by the power of prayer. Her life’s calling then becomes a resolve to share this good news with others. Compelled, Aldina packs up her brand new Model ‘A’ Ford with religious book, her baby daughter and 5 year old Sam. Together they travel across these United States. But this is only the start of Sam Borges’ adventures. During the Great Depression Sam decides on settling in Central California as a farmer, rancher and dairyman until a life changing earthquake drives him north to the land of the grand Sierra Mountains, the cool waters of Lake Tahoe and Bonanza’s own Ponderosa Pines.

Dianna Maria de Borges started working at the sleigh rides in 1997 and married Dwight Borges in the year 2000. They enjoy traveling, bike riding, spectator sports and exploring. She is the mother of four children; and, so far, the grandmother of one.

Dwight and Dianna live on a small ranch in Gardnerville, Nevada with their dog Joey, 13 horses, a cat and two fishes. Dianna enjoys music, painting, crafts and writing. She is active in the community and can be seen performing with the local community theatre in plays and Chautauqua. Dianna loves her ponys, Gizmo and Gadget, and gives pony rides at festivals, movies in the park, birthdays and parades.