Located in the very northeastern nook of Lake Tahoe on Mt. Rose Highway is Sky Tavern, an important piece of Nevada’s heritage. […] 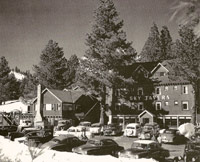 The ski and snowboard school is available to all children, including those with special needs through the Children’s Adaptive Ski Program, and to those from economically disadvantaged families through the Student Scholarship Fund.

Sky Tavern boasts a rich and colorful history, one that includes appearances by many Hollywood movie stars, prominent sports celebrities, and some of the most noted contributors to U.S. ski history.

In the years after World War II and during the early 1950s, Sky Tavern basked in the spotlight as a chic, intimate resort patronized by some of the most famous personalities of the day. Contemporary celebrities like Edward Teller, the father of the hydrogen bomb, and actors Rita Hayworth, Ingrid Bergman, Robert Stack, Gary Cooper, baseball legend Joe DiMaggio and others all found the Tavern experience exhilarating. 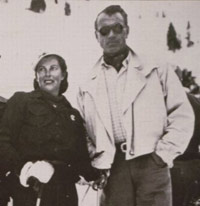 The Sky Tavern’s on-going Junior Ski Program was first established in 1948 when local skier and schoolteacher, Marce Herz, approached the original owners Keston and Carlisle Ramsey with the idea of reducing lift prices for schoolchildren and teaching them how to ski.

Herz, who went on to win the Nevada state ski championship in combined slalom and downhill in 1950, fervently believed that sports were good for everyone, but especially for children. Herz wanted to offer school kids the thrill and excitement of sliding down a mountain. Starting with six students, the innovative ski program Herz initiated has taught tens of thousands of children.

Over time newer, larger, and more modern ski resorts opened around Lake Tahoe, places like Squaw Valley in 1949 and Heavenly Valley in 1955. Only a mile up the road, but with much steeper and challenging terrain, the Reno Ski Bowl began running chairs in 1953 at the Slide Mountain, site of today’s Mount Rose Ski Area.

In 1959 the Ramseys sold the resort and eventually the City of Reno purchased the 143-acre property in 1968 for the exclusive use of teaching school children how to ski, and now snowboard too.

In 1991 the City of Reno decided that it could no longer run the Sky Tavern Ski Program. A group of dedicated parents came together and formed the current non-profit orginazation that not only manages the program but maintains the Sky Tavern Area all year round. 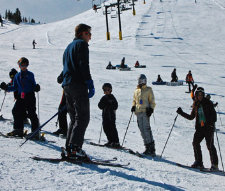 Their vision that all children should be given the chance to learn a winter sport at an affordable rate is the Sky Tavern Junior Ski Program’s mission. The largest volunteer ski school in the country, two to three thousand kids are trained during the winter season to be more active and to have more confidence in their abilities. In 2004 all funding from the City ended. It is only through additional fund raising efforts that STJSP can continue to serve the area’s children.

Starting in January, the eight week program is run Saturdays and Sundays by member adults that act as instructors and support staff for the ski area that is used and maintained exclusively by STJSP. Lessons are taught with the help and direction of our accredited Professional Ski School of America (PSIA) and American Association of Snowboard Instructors (AASI) volunteer Trainers.

The Reno Tahoe Winter Games Coalition (RTWGC) and the Junior Ski Program at Sky Tavern are teaming up to hold a benefit screening of the movie Ski Crazy. The event will be held at the Century Theater at The Summit Shopping and Lifestyle Center at 11 a.m. Sunday, Dec. 5. In addition to the screening of Ski Crazy, families will have the opportunity to register children for the rapidly approaching season of the Junior Ski Program at Sky Tavern.

Tahoe Olympian Tamara McKinney will be on hand to greet movie-goers and will visit with fans at a reception after the movie at the Firkin and Wolf Pub and Restaurant. Tamera is a three-time Olympic alpine skier and the 1984 women’s overall World Cup champion. Each movie ticket will include a 2-for-1 entree coupon at Firkin and Wolf.

The movie, filmed in 1955, was the first major Hollywood feature devoted to the sport of skiing. The hilarious comedy showcases Olympians and some of the scenes were filmed at Sky Tavern and the Tahoe Basin. It was produced and directed by Reno resident Gordon MacLean. This will be the first exclusive showing of the film in 40 years.

The North Lake Tahoe event is a fundraiser to benefit the Junior Ski Program at Sky Tavern and the RTWGC. Tickets are $12.00 for adults and $8.00 for children 12 and under. Tickets are available online at www.skytavern.com or by phone at 775-622-3345.