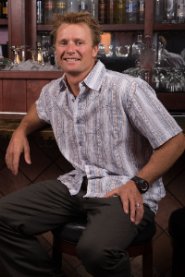 Daron Rahlves, the most decorated American Downhill and Super G skier in history, has a number of passions, with skiing and food are at the top of his list.  So it’s logical that Rahlves recently joined the ownership team of Moody’s Bistro & Lounge, an acclaimed restaurant in Truckee, one of the most popular ski towns in America.

A resident of Truckee with his wife Michelle and two children, Rahlves can be found mingling with dinner and lounge guests when his schedule allows.

Rahlves, who has spent many hours socializing with friends in Moody’s or enjoying a leisurely lunch or dinner with his wife, has a soft spot in his heart for the popular Truckee establishment. He says he’s impressed with the restaurant’s commitment to using local farmers and butchers, and organic ingredients whenever possible. Moody’s Executive Chef and co-owner Mark Estee even catered Rahlves’ wedding. The renowned skier also can be seen stopping by the restaurant for one of his favorite items on the menu, THE Warm Choc-O-late Cake with ice cream and malted milk chocolate sauce.

“I wanted to become connected with something that is well-established,” Rahlves said of his decision to partner with Moody’s. “The way they run the business is top-notch. It’s as much about personalized service as it is about the food. The staff chats with the customers and that sort of personal service goes a long way. I’ve traveled all over the world skiing, but Moody’s is one of my favorite hangouts. It’s a place where you can go to decompress after a rough day.” Daron Rahlves 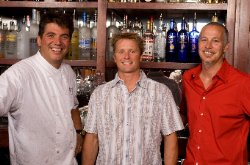 Co-owners JJ Morgan and Mark Estee both decided it was a match made in ski town heaven.

“Daron wanted to be part of the community, he’s a great role model and friend and we like the enthusiasm he brings to the table,” said Estee. “Over the years, he has been one of our most loyal customers and to have him join the Moody’s team seemed very natural.”

One of the most recognized names in skiing, Daron Rahlves won 12 World Cup races, had 28 World Cup podiums, 7 US National Titles, is the 2001 World Champion in Super G, won a Silver medal at the 2005 Worlds in DH and a Bronze medal in GS. He was the winner of the legendary Hahnenkamm Downhill in 2003 and SG in 2004 along with 7 podium finishes in Kitzbuhel over 5 years. 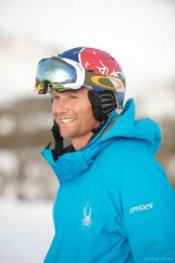 Growing up in Northern California, he spent winters at Lake Tahoe and summers at Clear Lake, and snow skiing and water sports became one of Rahlves’s many strong suits. At the age of 12, Rahlves’s family moved to Tahoe so that he could focus on competing. He became the Expert World Champion in 1993 and that same year was named to the US Ski Team. Thirteen years on the National Team included racing World Cup, being named to 5 World Championships teams and 3 Winter Olympic Games. Currently, he’s making a transition from alpine ski racing to skier cross comps on The 48 Straight Jeep King of the Mountain Tour, participation in the X-Games, and free skiing. His second year in skier cross Rahlves won the SkierX at Winter X Games 12, January 2008.

Currently, Daron is in physical training mode to compete for a place on the 2010 U.S. Olympic Ski Team, which he is expected to secure. As well, he kicked off the winter season by traveling heavily as the face for media, promoting two ski films he is featured in this year (Warren Miller’s “Dynasty” & Matchstick Productions “In Deep”). He will be in Italy for his first ski cross competitions December 21 & 22, followed by four World Cup events, the Winter X Games, and then off to Vancouver for the Olympic Ski Cross on February 21.

Locally, catch Rahlves competing in the Silver Belt Banzai at Sugar Bowl, March 13-14, 2010, plus skiing in Tahoe as often as he can, and, of course, fueling up at Moody’s, with their winter fondue a family favorite.

Located inside the historic Truckee Hotel on Commercial Row, Moody’s Bistro & Lounge is known for its locally sourced ingredients served in an informal atmosphere reminiscent of Tahoe in the 1920s. The restaurant serves a variety of Contemporary American specialties in a range of affordable price points, as well as a seasonal drink menu made with fresh herbs and fruit. The lounge also is home to live jazz shows by top U.S. and international acts. Moody’s is located a few minutes from Interstate 80 at 10007 Bridge Street in Truckee (on the corner of Commercial Row). For reservations, call (530) 587-8688.