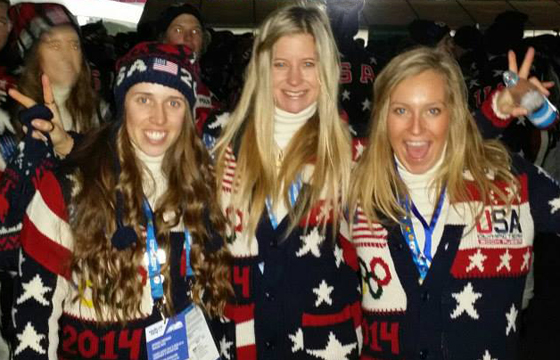 Jamie Anderson, Maddie Bowman, who won gold for snowboarding slopestyle and freeskiing halfpipe respectively, and Hannah Teter who placed fourth in snowboarding halfpipe, will be lauded at Sierra-at-Tahoe Resort.

A procession will take the Olympians via fire truck from South Tahoe High School, onto Highway 50, past the airport and through the town of Meyers, concluding at Sierra Resort. Community members can line Highway 50 along the route and cheer the Olympian procession as it drives by.

The party will include autograph signings, live music, food and drink specials, prizes and a raffle with proceeds to the Sierra Foundation, which grooms future world class athletes.

Meyers, Calif., residents Anderson, Bowman, and Teter may have put the tiny town of 3,000 just west of South Lake Tahoe on the international map as having the most gold medals per capita.

Maddie Bowman, 20, struck gold in the women’s freestyle skiing halfpipe competition at Sochi, also her first. The skier also brought home gold at the Winter X Games in 2013 and 2014 in the superpipe division.

Hannah Teter, 27, was a 2006 Olympic gold and 2010 Olympic silver medalist in the women’s snowboarding halfpipe. Teter finished fourth at the 2014 Sochi Winter Olympics in the halfpipe event. She was a 2003 Winter X Games gold medal winner and 5-time bronze medalist.

Well-wishers and partygoers are encouraged to board buses or carpool to the resort as parking will be limited. The athletes will depart from South Tahoe High School at 1 p.m. Bus schedules, times as well as all event details will be available at www.sierraattahoe.com.