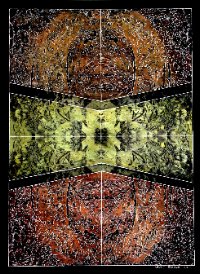 Matt’s work will be the featured art exhibit gracing the walls of Soule Domain May through July following his artist reception Wednesday, May 16th from 4:30pm to 6pm. Everyone is invited for complimentary appetizers and half-price beverages.

The Soule Domain is located across from the Tahoe Biltmore at 9983 Cove Street in Brockway.

“I create modern images that document contemporary man’s celebration of the eternal earth,” states Dodge. “I blend the excitement of my experiences with a primal urge to create.”

Dodge’s experiences, coming from a mountain existence, are a combination of adventure and awe. His pieces, part punk, pop, and psychedelic, are also part past, present and future.

Dodge’s labor is the exploration of form, based upon natural imagery. Throughout his body of work exists a consistent theme of examining the relationship between man and nature. 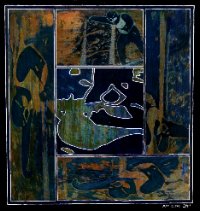 He adds, “I create, somewhat unconsciously, mixing visual imagery taken from my life in the Sierra with the swirling abstractions that reside deep within my soul. Ultimately, the finished creation should translate visually the potency of the life that I lust.”

Dodge resides with his wife and two children in Incline Village, Nevada. A snowboard pioneer and former world champion, he remains an active outdoor athlete and adventurer, using adrenalin to fuel his imagery.

Matt Dodge received the degree Bachelor of Fine Arts from the University of Colorado, Boulder.

Along with Jennifer Ornburge, Matt invites you to stop by their studio: 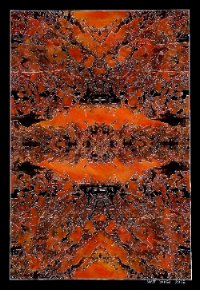