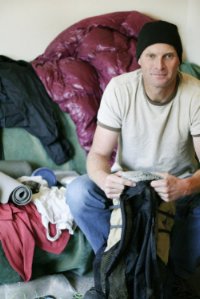 This story is reprinted from the November 2011 issue of Moonshine Ink.

One of America’s greatest athletes lives with his wife in a small, simple apartment in Truckee. Not many people have heard of Scott Williamson. He doesn’t score touchdowns, ride his bike around France, or win gold medals in the Olympics. He walks. But to say that he walks is like saying Fred Astaire danced. Scott walks very long distances, very fast.

On Oct. 11 of this year Williamson broke his own speed record for hiking the Pacific Crest Trail. He hiked over 2,600 miles from Canada to Mexico in 64 days, 11 hours, and 19 minutes, averaging more than 41 miles per day, with his longest day being 48 miles. He finished just 22 hours faster than the record he set with Adam Bradley several years ago.

I met with Williamson less than a week after he had finished the trail. The first thing I noticed about Williamson is that he is an incredibly friendly, social guy, which is somewhat surprising considering he spends months at a time alone on a hiking trail. The second thing I noticed: The whole time we talked he was continuously scratching, like he had the worst case of poison oak ever.

Williamson told me that last year the Station Fire in Southern California burned over 40 miles of the PCT. After the fire, a bush called Poodle-dog overgrew this section of trail. Fine hairs on this plant can get into your skin and deliver a toxin that gives your body wide, systemic itching. This year several hikers had to go off trail and into the hospital because of it. Fortunately for Williamson, he was infected near the end of the trip, but he says,ï¿½ “I am itching over every inch of my body. It lasts from two weeks to a month.”

I have a feeling that Williamson can handle it. This guy can handle anything.

“I averaged about five hours of sleep a night,” Williamson says. “The alarm would go off at 4:30 a.m., I was walking by 5 a.m., and would walk until about 8 p.m., sometimes as late as 10 p.m. I would take a half dozen five-minute breaks and one 20-minute break during the day, but I would be walking for at least 15 hours per day.”

Williamson was completely unassisted in his efforts. For the duration of the hike he never got into a car, and walked into and out of his 13 resupply points (adding an additional 18 miles of hiking). “I did a couple 300-mile food carries. But I found that if you carried too much it slowed you down more than going into town for a resupply.”

Not surprisingly, Williamson carried a homemade pack that weighed just seven pounds before water and food. Which is a good thing because he needed at least 2.5 pounds of food per day and multiple pounds of water during the dry stretches. He carried a homemade tarp instead of a tent and ate cold food, avoiding the need to bring a stove (he wouldn’t have had time to cook anyway). Williamson does not filter or treat his water. “I’ve been sick multiple times, I have had giardia…” (and then he ticks off a list of other parasites, but your trusty reporter was too dumbfounded to write them all down).“I am very selective about my water. If it looks like a heavily used area I will try to find cleaner water, but I have had to drink some nasty water. It saves time, I just dip and drink.” He does add, “If you don’t want to be sick at some point, you have to always treat your water.”

Williamson has also hiked the Appalachian Trail, the Continental Divide Trail, and most of the Florida Trail, but he likes the Pacific Crest Trail the best. He first hiked the PCT in 1992 at the age of 18 carrying an 80-pound pack. He has now completed it a total of 13 times, including a Yo-Yo, where he started hiking at the Mexican border, hiked to Canada, and then said, “Oh, what the hell,” turned around and hiked back to Mexico, 5,200 miles of hiking in one year. It’s pretty convenient, though, because you can just leave your car at the trailhead, hike to Canada, and then walk back to Mexico to get it.

But, 39-year-old Williamson says this last trip “was my first solo speed hiking. It was much more difficult because I didn’t have another person there going through the same thing. I was surprised at how difficult it was. It was the single most difficult hike I have done as far as mental energy put out. You have to be entirely self-motivated. Sometimes it took a lot of mental horsepower to get back up even though I wanted to lay there for hours. Sleep depravation was much more difficult solo. I fell asleep many times while I was walking; I would run into something and wake up. One minute you are walking and the next you are catching yourself as you fall.”

So what is the great prize he receives for hiking his butt off to accomplish this incredible record, which to my mind makes most other athletic feats seem like a walk in the park? Absolutely nothing. He says, “I could count on my hand the people who really care about the record.” Williamson receives no sponsorship money. He has no blog or website. He lives frugally and works hard as a tree climber to support his hiking. He drives a beat-up car and has never owned a home.

“It’s a lot of sacrifice but I am grateful that I have been able to do it,” he said.

Some readers may be jealous of the opportunity Williamson has created for himself, while many more I suspect may wonder why the hell he does it. “I enjoy the lifestyle of living out of a backpack for months at a time, being in these wild areas that are becoming more and more valuable in our modern world. It doesn’t get boring. Every trip is different.”