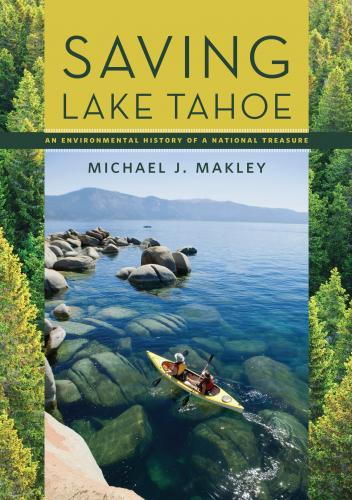 The history of Lake Tahoe begins with the Washoe Indians who resided on its shores for thousands of years, with minimal impact on the landscape.

The relatively brief American history at Lake Tahoe began in the mid-nineteenth century. Though awestruck by its beauty, the new arrivals were also intent on harvesting its abundant resources. In a mere half century, the basin’s forests and fisheries were destroyed, the lake’s pristine clarity dramatically reduced.

Left alone, nature healed itself, and by the 1960s mature forests once again surrounded the lake and its water clarity improved, with visibility more than one hundred feet deep. However, Tahoe’s wonders brought a new kind of threat: millions of annual visitors and incessant development, including ski resorts and casinos. Saving Lake Tahoe looks at the interaction through the years between human activities and Tahoe’s natural ecosystems. It is a dramatic story of ecological disasters and near misses, political successes and failures. Utilizing primary sources and interviews with key figures, Makley provides a meticulously researched account of the battles surrounding the management of the Tahoe basin.

Makley takes the story up to the present, describing the formation and evolution of a new type of governing body, the bistate Tahoe Regional Planning Agency, and groundbreaking efforts to utilize science in establishing policy. He depicts the passionate fights between those who seek to preserve the environment and advocates of individual property rights. Although Tahoe remains unique in its splendor, readers will understand why, with continued pressure for development, reversing environmental deterioration and improving the lake water’s clarity remain elusive goals.

Michael J. Makley has written five books on western history, including The Infamous King of the Comstock, which won Foreword Magazine’s 2007 Silver Award for biography. Booklist called his most recent work, A Short History of Lake Tahoe, “a polished gem,” commenting: “Makley’s work could serve as a blueprint for writing relevant and engaging local history.” He lives in the Sierra Nevada near Lake Tahoe.