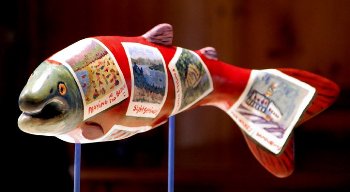 To creatively raise money for the Tahoe Tallac Association, Valerie Kuda organized the “Run Salmon Run” community art project to capture one of our finest natural wonders – the annual running of Kokanee Salmon up Taylor Creek every fall. 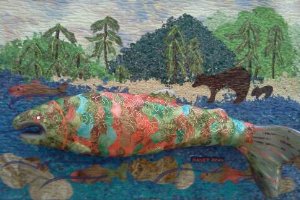 Kuda paired local artists with participating sponsors like Dog Dog Cat and the Cork N’ More to create a unique design on 4″ x 24″ fiberglass salmon. Throughout the summer, the artists embellished their fish, culminating in the auction at Montbleu, with funds going to the Tahoe Tallac Association.

“It’s like a runway show for fish,” says Tahoe Tallac Board Member Brenda Knox. “The level of creativity is astounding.” The high bidder of the fish can display it at their business or over their mantel, says Knox.

Local artists such as Jared Manninen, Kristen Boles and Gina Stowell donated their time to create a fish, and had fun with their creations. “It was interesting working with three- dimensional object, and great doing something that benefits the community,” said Manninen, whose fish currently resides with the Lake Tahoe Visitor Authority.

The Tahoe Tallac Association was formed in 1979 as a non-profit 501(c)(3) organization with the goal of assisting the Forest Service in restoring the three estates on the Tallac Historic Site and developing the site as a historic center while sponsoring as well as producing the Valhalla Arts & Music Festival held annually on the Heller Estate of the Tallac Historic Site. The site is listed on the National Registry of Historic Sites.

The Kokanee, landlocked cousins of the sea-going Sockeye Salmon, were introduced to Lake Tahoe in 1944 by biologists working on the lake’s north shore. These predecessors of today’s inhabitants quickly adapted to the alpine environment, joining brown trout, rainbow trout and Mackinaw among the most prominent game fish in Lake Tahoe. However, no other species in Lake Tahoe offers such a spectacular show during their mating season. 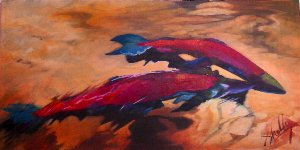 Each autumn, nature calls mature Kokanee to return to the streams from which they were hatched, select a mate, spawn and die. As that time approaches, adult males develop a humped back and a heavy, hooked jaw, equipping them for the inevitable battles over both mates and territory, and both sexes turn from their usual silver/blue color to a brilliant red. Then, en masse, the fish make one mad dash to their mating grounds, fighting their way up the shallow stream, displaying their colors to attract a mate, then battling to protect the small patch of gravel stream bed where they make their “redds” or nests.