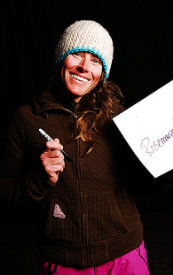 She won the Women’s North Face Masters event at Kirkwood in 2009.

Rose Daiek of South Lake Tahoe is the lady to watch and to beat.

Rose will be joined by other pro snowboarders from around the globe at Kirkwood for the final stop along the tour of The North Face Masters big mountain competition to battle it out in the legendary terrain of The Cirque, home to the resort’s most challenging cliff drops and chutes.

Rose has been riding at Kirkwood for over 16 years and is a certified massage therapist and pro mountain bike racer as well.  You can catch Rose on Thursday mornings on RSN TV as part of the local ski and snowboard crew sampling the snow at Kirkwood.

The North Face Masters is a three-stop competitive snowboarding tour specifically tailored for Big Mountain snowboarding.  Using the open expanse of natural mountain terrain, Big Mountain snowboarding is all about pushing personal limits and freedom of expression. It’s a test of a snowboarder’s creativity, athleticism and ability to push themselves through personal limits — and the successful management of huge cliff jumps, tight chutes, steep powder stashes, and variable snow and weather conditions.

As the final stop of the tour, the Cirque at Kirkwood is a perfect venue for this spectator-friendly sport. 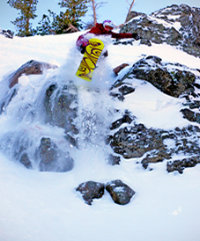