He has a style all his own. An extension of his being, Reds Regan’s paintings are free flowing, bold, and expressive.  A charismatic style emblematic of Reds’ passion for living and his drive to express it on canvas. […]

Through his fluid brush strokes and bold multi-layered colors, Reds’ primitive contemporary art is an extension of his innate connection with nature. His unique composition and energetic expression create a poetically simplistic yet boldly relaxed style.

And, he’s been on a roll lately.  His pallet is full with commissioned work and live painting performances.

Reds has been commissioned by the Squaw Valley Ski Museum Foundation to create a ski series of original paintings to be used on merchandise to raise funds for a new ski museum proposed to be built at Squaw.  But his most favorites gigs are his live painting performances at wineries, restaurants and various venues throughout Northern California. 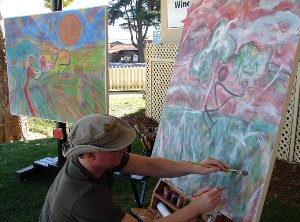 Reds enjoys the interaction with the audience, especially with the children.  He often lets them choose the colors.

“I enjoy the interactive atmosphere of my live painting performances and the reaction of the crowd, especially the kids.  At times, while I’ll have the concept of the painting in mind, I’ll let the audience pick the colors at random.” – Reds Regan

The high energy motion of brush strokes in Reds’ work is a function of his ambidextrous ability. He paints with both hands at the same time. And with a six foot wing span, he’s well suited to paint large canvases ranging from five to ten feet. As an artist with macular degeneration, his eyesight has become blurred and he can no longer see straight lines—they bulge and curve. His primitive contemporary paintings are as much a function of his imagination as they are his impaired vision.  A reflection of his approach to life, Reds prefers the fluid lines of the body instead of the rigidity of a structured world. 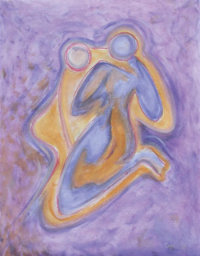 To accentuate his signature curvaceous lines, Reds paints with multiple layers of water-based acrylics that he mixes on his own and lets age like wine. To capture the subtleties of light in his paintings, he paints in direct sunlight, incandescent light, and fluorescent light.  Finally, he utilizes his architectural design background to hand-sculpt a custom frame that marries the frame with the artwork, bringing a three-dimensional component to the finished piece.

Reds paintings have been sold throughout the country and Canada including Rain Dance (top) which is now in Los Angeles, and “Red Line” (left) that resides in Seattle.

Reds has shown his work in galleries and shows in various locations  including Key West, Florida, Fenwick Island, Delaware and Lake Tahoe. He was born in Madison, Wisconsin and grew up in Delaware. He studied architecture and fine art at colleges in Pennsylvania including the Art Institute of Philadelphia.

Reds has been a professional artist for 30 years. His art is striking. Colorful. Powerfully sensual. It leaves interpretation open on many levels in a display of lines, color and form. The intensity of Reds’ paintings is rooted in his Irish heritage. He studied Celtic and other primitive art forms while developing his own unique style which he calls primitive contemporary. His unique composition and energetic expression create a poetically simplistic yet boldly relaxed style. Reds’ work has been associated with Salvador Dali, Joan Miro and Picasso. 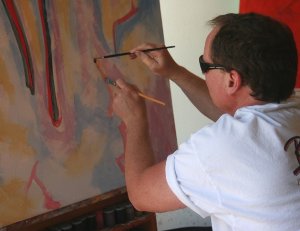 At the turn of each century, there has been a defining art style which has thrust the art world forward. Reds’ trademark style of primitive contemporary indicates the beginning of a modern movement coming full circle to the fundamentals of line, color and form. The style is primal with raw energy. This energy possesses a comforting aura which strikes a contrast to our technology-dependent society. In essence, Reds’ primitive contemporary art is soothing to the viewer while maintaining a modern edge.

To see more of his remarkable work and to learn more about Reds, please visit www.redsfineart.com.