Her competitive spirit was nurtured at a young age racing sailboats in the San Francisco Bay area with her dad. Along with trail running and skiing, her athletic prowess translated into a lifelong passion for fitness and being in the mountains.

The rest is a typical story for a long-time Lake Tahoe local.

After graduating with a degree in recreation management from Sacramento State, Debbi was going to take a year off and learn cross country ski racing from Glenn Jobe an Olympic biathlete who established the Cross Country Center, which was later purchased by Kirkwood.

She never returned to the Bay area.

When Jobe moved to Truckee to start another resort, Debbi assumed responsibility for managing the Kirkwood Cross Country Center as she was beginning her cross country ski racing career. But her competitive days weren’t over. Within two years after starting to race, Debbi was number one in California. She joined the Rossignol Ski Team and traveled around the country representing Kirkwood frequently taking top honors. She raced in the Great American Ski Chase and won the title in 1987. 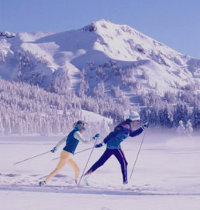 Debbi has also been successful at the World Masters level. Beginning in 1992 she raced at events in Alaska, Italy, Sweden and Lake Placid bringing home eight gold medals and two silvers.  Debbi spent several years coaching and working with the elite kids of the Far West Nordic Team.

Watching Debbi ski is like poetry in motion.  Graceful, efficient, and seemingly effortless, she is at one with the snow.  An elite athlete, Debbi is passionate about health and fitness which allows her to creatively express herself on and off the mountain.  Above all, she always has fun at the center and never tires of turning people on to skiing.

In the summer, Debbi enjoys hiking the Sierra with Sage, her Australian Shepherd, and her llamas. She started raising llamas in 1982, naming her first baby “Hope” which was born in Hope Valley. At one point, she had eight llamas in the herd and ran commercial pack trips during the summer.

Understanding the power of nature as a healing agent, as a volunteer for CASA (a court appointed special advocate for children) she would take children on walks with her llamas.  As she expected, on these walks the children opened up about themselves while learning how to handle the large animals with tender loving care and respect; skills Debbie hopes will transfer to their own lives. An avid environmentalist, Debbi works tirelessly with the Friends of Hope Valley on conservation and preservation projects.

Today, after 30 years at Kirkwood, Debbi oversees the ski patrol, ski school, rental shop, grooming of the 80km of cross country ski trails and manages a staff of twelve at the Cross Country Ski and Snowshoe Center. She is often found out on the trails making sure that the trails are in pristine shape and offering words of encouragement or tips to those just getting started with traditional (kick and glide) or skate skiing.