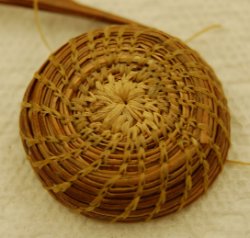 Join Washoe-Paiute weaver Audrey Frank for a lesson on coiled basketry utilizing a resource that is readily available…pine needles!

Audrey Frank’s family tree branches out to both the Summit Lake Paiute and Washoe Tribes of northern Nevada. Her grandmother taught her to bead daisy chains, but Audrey didn’t become serious about basket weaving until many years later when she learned how to make pine needle baskets from her aunt and step-mother. They taught her how to start the basket, create its “Washoe running loop stitches” and make decorative lids. She makes several basket styles, but all range from 1 to 1.5 inches of tightly woven needles. Each woman in her family weaves a signature design into their basket lids. Audrey often incorporates a small pine cone on the top.

Audrey passes on her family traditions of basket making through classes and workshops where she demonstrates weaving techniques and discusses her Native heritage and culture. Participants learn about traditional basket materials, techniques, processing, styles and their importance in the Washoe and other Great Basin tribes. Among Native Americans in the Great Basin, pine needle basket weaving has a unique story because it is primarily a one-family tradition and was initially learned from non-Native teachers. Audrey’s aunt didn’t learn pine needle weaving from the generation before her, nor did she learn from family and friends as is often the case with folk art. Instead, it was in a workshop taught by non-Native weavers at Lake Tahoe’s Gatekeeper’s cabin more than 20 years ago.

The Washoe are a small tribe living in western Washoe and Douglas Counties, Carson City and the Lake Tahoe area, with some members as far away as Mono County, California. Their baskets are distinct from those of the other major Great Basin tribes in some respects, but they share many characteristics. Audrey’s family is noted for their pine needle baskets because they were the first Native Americans in Nevada consistently weaving baskets out of this material. Audrey is learning traditional willow basket weaving as well, which she considers more complex than the pine needle weave and more traditional for both the Washoe and Paiute cultures.