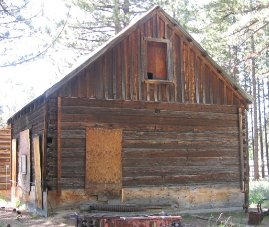 The oldest standing structure at Lake Tahoe, the Osgood Toll House, was built in the summer of 1859.

Did you know it played a significant role in the Comstock Lode?

The discovery of silver in 1858 in Virginia City, NV was the greatest single mineral strike in U.S. history.  The legendary Comstock Lode revitalized the dreams of the 49er gold prospectors who had virtually exhausted the California gold mines beginning with the discovery of gold at Sutter’s Mill in Coloma in 1848.

The rush for silver also caused considerable damage and traffic jams along the route between Hangtown (Placerville) and Virginia City. To curb the damage, toll houses were established along the route. 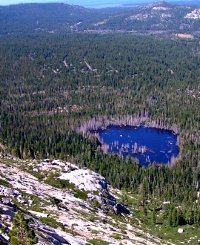 An opportunist, Nehemiah Osgood arrived in South Shore from New Hampshire in 1859 and built and operated a toll house at the foot of Meyers Grade (Osgood’s Grade) where Echo Creek flows into the Upper Truckee to collect money for road maintenance. The road was busy in both directions with coaches, freight schooners, bullion wagons, carrying the tides of prospectors eastward to the Comstock Lode, and Pony Express riders. The typical toll was 5 cents per animal and 6 bits for men and their wagons.

Traffic dropped off considerably with the completion of the railroad over Donner Summit in 1868.  Osgood’s Toll House was finally abandoned in 1898 when toll houses were phased out. Osgood Swamp can still be seen at the bottom of the grade, and lodge pole stumps dating back to the great droughts of 1100 and 1350 have been found beneath the surface.

The Celio family rescued the toll house and moved it to their ranch where it was used for storage for over 50 years. In 1974, the Historical Society was instrumental in moving the toll house onto public land on highway 50 at Rufus Allen Blvd. In 1991, Osgood’s Toll House reached its final home next to the museum and log cabin. Today, it sits on a foundation and awaits designation by the state as a Historic Building and work to arrest its decay is being planned. 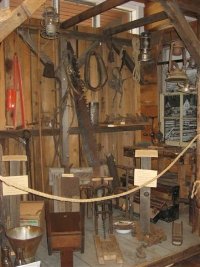 The Lake Tahoe Historical Society Museum features displays and artifacts which chronicle the development of the Lake Tahoe basin including the earliest inhabitants – the Washoe, John Fremont’s discovery of Lake Tahoe, westward moving wagon trains, gold and silver rush traffic through the basin, Pony Express stations, the logging and railroad industries, early steamships, and more recently, the development of tourism, skiing and gaming. One of the largest exhibits is part of the old dairy from Celio Ranch, a family farm established in 1857 in Meyers which still exists today.

In addition to the exhibits inside the newly refurbished museum, directly behind the museum is the Old Log Cabin built in 1931 (see photo below). And a few blocks away at the Bijou Community Park is the museum’s Lake Valley Railroad narrow gauge and log carrier exhibit.

The museum also has a great little book store brimming with literature on early immigrants, building of the railroads, native inhabitants, local geology and wildflowers. Some notable photographic books by local authors include “TAHOE in Black & White” by South Shore photographer Jim Hildinger, and “Memories of Tahoe” and “Tahoe’s Gilded Age” by North Shore photographer, Jim Bell. Visitors, researchers and history buffs are welcome to peruse the artifacts and the large collection of historic photos which can be special ordered. 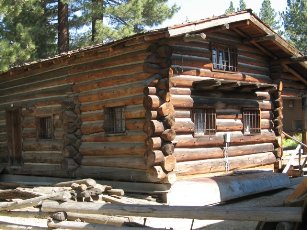