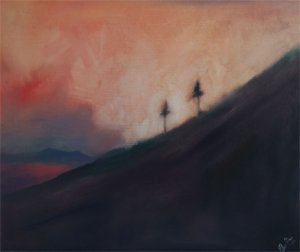 Shelley and her husband were at Hobart Lake on June 24, 2007 when the Angora fire broke.

While they watched all night from their deck on Kingsbury Grade, like many Shelley couldn’t help but notice the fire’s raging beauty.

They were mesmerized by its changing mood that fluctuated with the shadows of sunset and explosive theatrical colors of the darkest hours.

Shelley’s oil painting “Finding beauty in chaos” was inspired by the stark beauty she witnessed.

“You need chaos in your soul to give birth to a dancing star.” – Friedrich Nietzsche

I was born in North Wales (UK), graduating with a degree in Art & Visual Culture in 1997. I had my first exhibition in 1995, whilst still a student, and this inspired me to work hard to forge a career in art.

After graduating, I began painting rock climbers, inspired by a trip to Colorado where I tried climbing for the first time. ‘Climbing Art’ became my specialty, and was extremely well received in the UK. An initial sellout exhibition led to several National TV News stories, and a feature on a Welsh Arts program. I was asked to exhibit at the Kendal International Mountain Film Festival, where I met the film maker David Jinks. His film company, FridgeProductions made an award-winning documentary, ‘High Art’, profiling my work in 2005. I built up a successful art gallery from 2000 – 2005, which attracted corporate sponsorship and public funding.

I left the UK to travel, paint and climb in June 2005 – during which time I met my husband, Taylor. We now live in Lake Tahoe, USA.

My work is informed by the rigorous discipline of drawing from life, as I started drawing from the nude figure aged 12. I take my inspiration from the artists Rodin and Michelangelo, as they both used muscular movement to render inner feelings, and I strive to achieve the same sense of emotion and passion in my work. 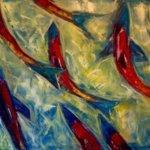 My work is mostly representational, inspired by my environment, people and life. Even the most unlikely subjects, such as Kokanee Salmon, or young vines growing in a winery are metaphors for how I am feeling at the time, so can be regarded as a visual fusion or observation and experience.

I regard my work as an expression of energy, movement and light. I strive to achieve this through colour, bold brushstrokes or charcoal lines, and through the subject’s own momentum on the picture plane. I work in a broad range of media, but particularly love oils for major pieces.