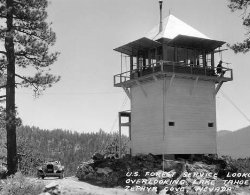 It is the last surviving fire lookout in Nevada, and one of three in the Tahoe basin.

The Zephyr Cove Fire Lookout has been meticulously maintained and restored for the last dozen years by its current local landowner.

While there are only three in the Tahoe basin, our region has several historic and noteworthy lookouts, some still operated today.

The Forest Service manned the 14′ x 14′ Zephyr Cove fire lookout tower into the 1970s.  In 1955-56 and 1958, the first USFS employees stationed at the lookout were Leonard and Margaret Hoff, Idaho school teachers who came to Tahoe in the summer. The tower was furnished with a bed, table, refrigerator, stove and sink upstairs. Downstairs, there was a water heater, bunk beds, bathroom and shower.  Abandoned by the USFS in the 1980s, luckily (for all of us) locals jumped in to preserve this important Tahoe landmark and historic site.

Lookout towers played a huge role in fire prevention and detection in Lake Tahoe in the early 20th century. They were built on peaks and mountains, with an observation range of about 30 miles in diameter.

There are 2 other fire lookouts in the Tahoe Basin:

All 3 Tahoe lookouts are still standing today. You definitely feel like you are stepping back in time when you tour them and their surroundings. They are also perfect destinations by bicycle and have outstanding views of Tahoe – duh!

In addition to the fire lookouts in the basin, there are several others nearby.

Here are just a few:

Off of I80 going west past Truckee, above Rattle Snake Creek. The 1909 stone fire lookout station atop Red Mountain was abandoned in 1934. 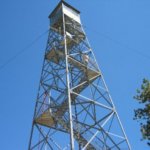 Hwy 50, overlooks the South Fork American River Canyon on the Eldorado National Forest. Alder Ridge Lookout was constructed by the CCC in 1936.

It is a 60′ Aermotor tower with a 7’x7′ metal cab. In 2004 a Passport In Time project restoring the tower and ground residence was completed. 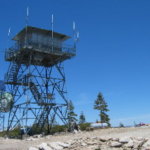 Off of Emigrant Trail and Highway 88.

Tony, the lookout there for years, has one of the most extensive pictorials of historic lookouts in the state.

He’s a wealth of knowledge about our forests, geology and cultural heritage.

Off of Hwy 88 west of Kirkwood.

Not sure if it’s still standing. It was rumored that it would be demolished in 2004. 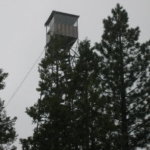 Sure hope not. It’s a part of Sierra Americana.