While many call it Emigrant Peak, it’s actually named after Melissa Coray, a Mormon pioneer woman who walked over 2,000 miles to the west. […] 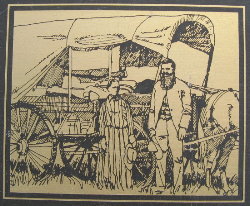 The United States Board of Geographic Names in October 1994 named the 9,763-foot peak located southeast of Kirkwood Ski Resort in honor of Melissa Coray and the “thousands of emigrant women who endured similar hardships in settling the West.”

Sgt. William Coray and his wife Melissa were among the 46 battalion members who blazed the “highway” through Carson Pass.

The original route they took sits behind Kirkwood Ski Resort – a favorite mountain bike trail above Silver Lake that follows the historic Mormon-Carson Pass Emigrant Trail. Those with enough energy left after riding Squaw Ridge or up Horse Canyon to Tragedy Springs hike to the top of Melissa Coray Peak, often mistakenly calling it Emigrant Peak. 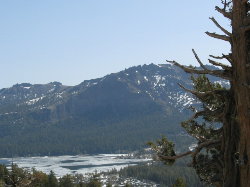 In 1846, the Mormon Battalion, a group of 500 men and women, commanded by Col. Philip St. George Cooke marched to Fort Leavenworth, Kan., and from there on to California to fight the war with Mexico. Sergeant William Coray joined the Battalion, and his wife Melissa also signed on as a laundress along side her husband.

After the war in 1847, 45 of the men and one woman – Melissa Coray – headed east for the Great Salt Lake Valley. They chose not to remain in California for the gold rush.

On July 19, 1848, they found a common grave of three murdered comrades at the site they named Tragedy Springs. In 40 days, the party blazed 170 miles miles of wagon road across trackless terrain until they joined the established California emigrant trail. Beginning in August 1848, thousands of west bound wagons used this same route until 1863 when the present day Hwy 88 and Carson Spur was opened with explosives.

While Melissa belittled the walking she did, other members of the Battalion said that she traveled on foot a large part of the 2,000 miles to San Diego and most of the return journey to Salt Lake.

Melissa and the other pioneer women make our modern day feats on full suspension bikes pale in comparison.