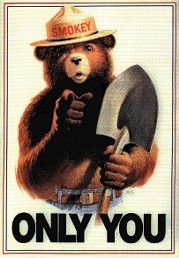 Did you know the Smokey Bear Wildfire Prevention campaign is the longest running public service advertising campaign in U.S. history, and his correct name is Smokey Bear?

Meet Smokey, sing the “Smokey the Bear” song and take a tour along Taylor Creek on the Rainbow Walk – one of his favorite places to hang out – every Saturday during the summer at 10 a.m.  The Taylor Creek Visitor Center is located three miles north of South Lake Tahoe on Highway 89.  For more information, call the Visitor Center at (530) 543-2674.

Smokey’s correct name is Smokey Bear. In 1952, songwriters Steve Nelson and Jack Rollins added “the” to their hit song “Smokey the Bear” to give the song rhythm. This small change has caused confusion among Smokey fans ever since.

The History of Smokey (www.smokeybear.com)

Smokey Bear was created in 1944. The Smokey Bear Wildfire Prevention campaign is the longest running public service advertising campaign in U.S. history. As one of the world’s most recognizable fictional characters, Smokey’s image is protected by U.S. Federal Law and is administered by the USDA Forest Service, the National Association of State Foresters and the Ad Council. 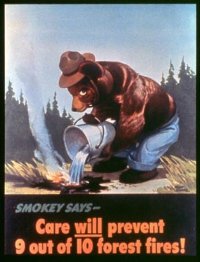 The campaign’s original catch phrase was “Smokey Says – Care Will Prevent 9 out of 10 Forest Fires.” In 1947 it was changed to “Remember… Only YOU Can Prevent Forest Fires.” Most recently, in 2001, it was again modified to “Only You Can Prevent Wildfires” in response to a massive outbreak of wildfires in natural areas other than forests.

Walt Disney’s motion picture, “Bambi” was produced in 1944 and Disney let the forest fire prevention campaign use his creation on a poster. The “Bambi” poster was a success and proved that using an animal as a fire prevention symbol would work. A fawn could not be used in subsequent campaigns because “Bambi” was on loan from Walt Disney studios for only one year; the Forest Service would need to find an animal that would belong to the Cooperative Forest Fire Prevention Campaign. It was finally decided that the Nation’s number one firefighter should be a bear.

On August 9, 1944, the first poster of Smokey Bear was prepared. The poster depicted a bear pouring a bucket of water on a campfire. Smokey Bear soon became popular, and his image began appearing on other posters and cards.

The latest Smokey Bear slogan created by the Ad Council is “Get Your Smokey On.”

Smokey the Bear Song by Steve Nelson and Jack Rollins

With a Ranger’s hat and shovel

and a pair of dungarees,

you will find him in the forest

always sniffin’ at the breeze.

when he tells ’em to beware, 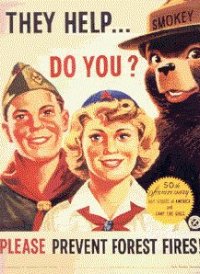 He can find a fire before it starts to flame.

That’s why they call him Smokey,

That was how he got his name.

You can take a tip from Smokey

’cause they’re good for kids to climb in

and they’re beautiful to see,

you just have to look around you

and you’ll find it’s not a joke,

to see what you’d be missin’

if they all went up in smoke.

You can camp upon his doorstep

and he’ll make you feel at home;

You can run and hunt and ramble

anywhere you care to roam.

He will let you take his honey

and pretend he’s not so smart,

but don’t you harm his trees

for he’s a Ranger in his heart.

If you’ve ever seen the forest

when a fire is running wild,

and you love the things within it

then you know why Smokey tells you

when he sees you passing through,

its the least that you can do.’