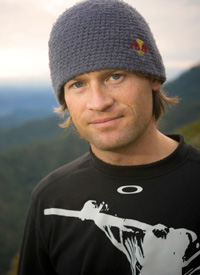 “McConkey”, the movie, is based on the life of local free-skiing icon Shane McConkey.

Featuring incredible action footage and Shane’s own home videos, “McConkey” offers a rare look at his most intense risks as well as an intimate portrait of his personal life.

Prepare to laugh, cry, learn and be inspired to live out your dreams. It is our pleasure to partner with the Shane McConkey Foundation and raise awareness and funds for this amazing local charity in his honor. The Shane McConkey Foundation has given back graciously to our local schools and community by raising environmental awareness and promoting a sustainable future. We will open the evening with a safety presentation by the SVI Kids program. The focus will be geared towards navigating risk management in the world of extreme sports. The film will be followed by a rare Q & A session with McConkey Executive Producer Sherry McConkey and Chief Editor/Director Scott Gaffney and special guests. Kids 16 & Under are free with a suggested donation at the door. Please reserve kids tickets along with any other ticket purchases.

“Red Bull Media House is proud to release a film about Shane McConkey,” commented Werner Brell, Managing Director of Red Bull Media House North America. “We want the world to know who Shane was and how he lived his life to the fullest. The motivation for this multiplatform distribution approach is to give back to the family and inspire a broad audience. Proceeds from the film will go to a trust set up in the family’s name.”

Produced by Red Bull Media House, in association with Matchstick Productions, and directed by Murray Wais, Steve Winter, Scott Gaffney, David Zieff and Rob Bruce, “McConkey” celebrates the life of one of the world’s ultimate innovators: Shane McConkey. Featuring incredible action footage and Shane’s own home videos, “McConkey” offers a rare look at his most intense risks as well as an intimate portrait of his personal life.

For details, including tickets and updates for the Squaw Valley kickoff, and behind-the-scenes videos of Shane, his family and friends, visit www.mcconkeymovie.com.