Martin Hollay and a Lifetime of Skiing and Glove Making 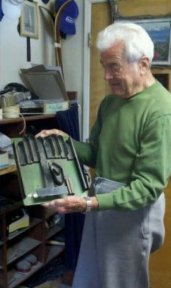 As an apprentice glove maker in Hungary in the 1930s, Martin eventually moved to the U.S. in 1958 settling in South Lake Tahoe to live, ski, raise a family, and continue making hand stitched leather gloves using his glove press that is over 100 years old.

On Tuesday, November 2nd, the Sierra Nevada Olympic & Winter Sports Museum and Palisades Tahoe honored South Lake Tahoe legend Martin Hollay, a 101-year old who has made an impact in the ski industry.

Hollay, originally from Hungary, is a former ski patroller and is known across Tahoe for his many contributions to the industry, most notably in the 1960 Olympics where he built the cross country track at Palisades Tahoe. He still participates in cross country skiing.

In 2017, Heavenly Mountain Resort named a grove of trees after Hollay called Martin’s Trees. Hollay was a 25-year employee of Heavenly and was responsible for crafting many of the Nevada runs.

The ceremony was held in The Village at Palisades Tahoe where Hollay told stories from his long history on snow to the small crowd in attendance.

During the ceremony, Dee Byrne, president and COO of Palisades Tahoe, presented Hollay with a metal sculpture made from old lift parts from the resort and a complimentary Palisades Tahoe season pass, as attendees sang a round of “Happy Birthday” — Hollay turned 101 this week.

Eddy Ancinas, a board member of the future SNOW Sports Museum and an IOC guide at 1960 Winter Olympics, said the museum eventually looks forward to telling the stories of Hollay and other legendary characters who have worked behind the scenes to make the ski community what it is today. Her husband, Osvaldo, who was a competitor at the 1960 Winter Olympics, closed the ceremony with a striking yodel.