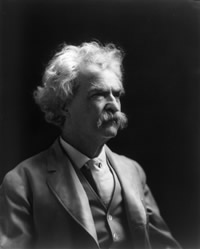 Samuel Langhorne Clemens (November 30, 1835-April 21, 1910), better known by his pen name Mark Twain, was among the most famous of American humorists, writers and lecturers.  His name was derived from the shout used to mark how deep the water was in steamships “Mark Twain!” in other words, mark two fathoms.

At his peak, Mark Twain was probably the most well-known American anywhere. William Faulkner wrote he was “the first truly American writer, and all of us since are his heirs.”  It is widely agreed that Twain’s greatest contribution to American literature is his novel, The Adventures of Huckleberry Finn. Ernest Hemingway said: “All modern American literature comes from one book by Mark Twain called Huckleberry Finn. … all American writing comes from that. There was nothing before. There has been nothing as good since.”

Twain also penned dozens of additional works including The Adventures of Tom Sawyer, The Prince and the Pauper, A Connecticut Yankee in King Arthur’s Court and the non-fictional Life on the Mississippi. 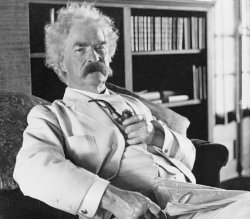 Twain began as a writer of light humorous verse, an exemplar of what came to be called “California humor.” By the end of his career he was embittered and disillusioned with America. He is credited with coining the phrase “The Gilded Age” to describe late 19th century America’s preoccupation with wealth, corruption and decadence.

Published early in 1872, Mark Twain’s second major work was titled Roughing It. It is about going west to dig for wealth in the rocks of Nevada and ultimately finding it instead as a journalist and entertainer. It was written between 1870 and the end of 1871, and based on activities Twain had experienced (mostly as Samuel Clemens, of course) between 1861 and 1866. Among its most famous passages is Twain’s description of Lake Tahoe.

It is alleged that Twain even started a forest fire at Lake Tahoe while roughing it.

It was the end of August, and the skies were cloudless and the weather superb. In two or three weeks I had grown wonderfully fascinated with the curious new country and concluded to put off my return to “the States” awhile. I had grown well accustomed to wearing a damaged slouch hat, blue woolen shirt, and pants crammed into boot-tops, and gloried in the absence of coat, vest and braces. I felt rowdyish and “bully,” (as the historian Josephus phrases it, in his fine chapter upon the destruction of the Temple). It seemed to me that nothing could be so fine and so romantic. I had become an officer of the government, but that was for mere sublimity. The office was an unique sinecure. I had nothing to do and no salary. I was private Secretary to his majesty the Secretary and there was not yet writing enough for two of us. So Johnny K — and I devoted our time to amusement. He was the young son of an Ohio nabob and was out there for recreation. He got it. We had heard a world of talk about the marvellous beauty of Lake Tahoe, and finally curiosity drove us thither to see it. Three or four members of the Brigade had been there and located some timber lands on its shores and stored up a quantity of provisions in their camp. We strapped a couple of blankets on our shoulders and took an axe apiece and started — for we intended to take up a wood ranch or so ourselves and become wealthy. We were on foot. The reader will find it advantageous to go horseback. We were told that the distance was eleven miles. 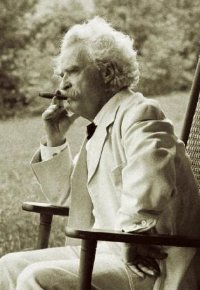 We tramped a long time on level ground, and then toiled laboriously up a mountain about a thousand miles high and looked over. No lake there. We descended on the other side, crossed the valley and toiled up another mountain three or four thousand miles high, apparently, and looked over again. No lake yet. We sat down tired and perspiring, and hired a couple of Chinamen to curse those people who had beguiled us. Thus refreshed, we presently resumed the march with renewed vigor and determination. We plodded on, two or three hours longer, and at last the Lake burst upon us — a noble sheet of blue water lifted six thousand three hundred feet above the level of the sea, and walled in by a rim of snow-clad mountain peaks that towered aloft full three thousand feet higher still! It was a vast oval, and one would have to use up eighty or a hundred good miles in traveling around it. As it lay there with the shadows of the mountains brilliantly photographed upon its still surface I thought it must surely be the fairest picture the whole earth affords.

We found the small skiff belonging to the Brigade boys, and without loss of time set out across a deep bend of the lake toward the landmarks that signified the locality of the camp. I got Johnny to row — not because I mind exertion myself, but because it makes me sick to ride backwards when I am at work. But I steered. A three-mile pull brought us to the camp just as the night fell, and we stepped ashore very tired and wolfishly hungry. In a “cache” among the rocks we found the provisions and the cooking utensils, and then, all fatigued as I was, I sat down on a boulder and superintended while Johnny gathered wood and cooked supper. Many a man who had gone through what I had, would have wanted to rest. 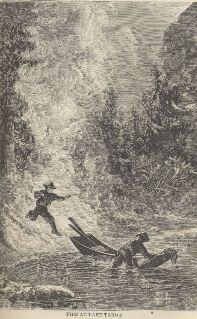 It was a delicious supper — hot bread, fried bacon, and black coffee. It was a delicious solitude we were in, too. Three miles away was a saw-mill and some workmen, but there were not fifteen other human beings throughout the wide circumference of the lake. As the darkness closed down and the stars came out and spangled the great mirror with jewels, we smoked meditatively in the solemn hush and forgot our troubles and our pains. In due time we spread our blankets in the warm sand between two large boulders and soon feel asleep, careless of the procession of ants that passed in through rents in our clothing and explored our persons. Nothing could disturb the sleep that fettered us, for it had been fairly earned, and if our consciences had any sins on them they had to adjourn court for that night, any way. The wind rose just as we were losing consciousness, and we were lulled to sleep by the beating of the surf upon the shore.

It is always very cold on that lake shore in the night, but we had plenty of blankets and were warm enough. We never moved a muscle all night, but waked at early dawn in the original positions, and got up at once, thoroughly refreshed, free from soreness, and brim full of friskiness. There is no end of wholesome medicine in such an experience. That morning we could have whipped ten such people as we were the day before — sick ones at any rate. But the world is slow, and people will go to “water cures” and “movement cures” and to foreign lands for health. Three months of camp life on Lake Tahoe would restore an Egyptian mummy to his pristine vigor, and give him an appetite like an alligator. I do not mean the oldest and driest mummies, of course, but the fresher ones. The air up there in the clouds is very pure and fine, bracing and delicious. And why shouldn’t it be? — it is the same the angels breathe.