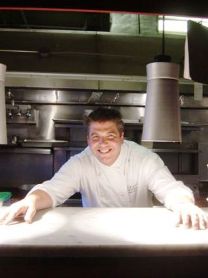 If there’s one certainty about Mark Estee, Executive Chef and Co-owner of Moody’s Bistro & Lounge and Baxter’s Bistro & Lounge, it’s that diners can expect the unexpected, a new twist on an old favorite or a surprising burst of flavors. Estee’s energy and spirit are contagious and it comes across in his cooking and in the experience diners have at his restaurants.

Take, for example, his “Whole Hog” philosophy. This involves a sustainable way of preparing food that is as much about paying respect to the animal as it is about creating fare for what has become a shining star among Truckee restaurants. “I enjoy letting already great products be the focus of a dish as much as I like to coax greatness from lesser known food items, “Estee explains. “Everyone cooks the loin or tenderloin, but what about the hams and feet? For every tenderloin there are two feet to use! If we can use these products, and have them become more accepted and available we are doing the animals a service by using everything they have to offer.” According to Estee, this is the old way of cooking, but with a new sensibility.

Anyone who gleans from the statement that Estee likes to do things a little differently would be absolutely correct. In fact, it’s Estee’s creativity combined with his commitment to serve only the freshest, seasonal ingredients that has transformed Moody’s into a bistro that stands out among other Lake Tahoe restaurants. “The relationship we have with our suppliers is what drives our kitchen,” said Estee. “We are nothing without great product – our job is to apply a solid, simple and creative process to these products and treat each one with respect, as this is what our customers have come to expect from us.”

Baxter’s Bistro & Lounge provides Estee with another opportunity to showcase his creativity by offering menu items that are a reinterpretation of classics. Lobster, for example, may become the main ingredient in a potpie; the Baxter Burger might be served with foie gras and truffles, or beef oscar may be interpreted in an unexpected way.

At Moody’s and Baxter’s, Estee’s culinary credo involves the philosophy that “food should be fresh, seasonal, local, and simple.” Consequently, Estee has cultivated relationships with nearby farmers to ensure his kitchen always features the freshest seasonal produce available. Estee plans his nightly menu based on items that may have only that morning been growing in a field or green house. A majority of all the food served is from local, organic, sustainable producers that Estee has personal relationships with. “I was fortunate enough to travel to Iowa with Bill Niman to cook for Paul Willis and the many proud hog farmers that supply Niman Ranch, “said Estee. “That trip changed my life – I was able to make the connection of farm to table and to be able to bring that back to the Moody’s staff (and anyone else who will listen!) has been amazing.”

Estee’s philosophy and contemporary American cuisine have landed him in the spotlight of the national culinary scene from New York to California. He’s appeared twice at the James Beard House in Manhattan. At Ahwahnee Chef’s Holidays, featuring some of America’s most innovative and acclaimed chefs, Estee’s cooking demonstrations and dinners are some of the most popular. He has been asked back to the Ahwahnee six times and counting. In 2008, to celebrate Moody’s commitment to wine and food pairings, Estee was one of the featured chefs at the Pebble Beach Food and Wine event. His skills also have been showcased in the New York Post, Cosmopolitan, Plate, Wine Country Living, SKI Magazine and Food Arts to name a few.

Chef Estee’s most notable audience was in Moody’s: in February 2003, then again in 2004, when he was called upon by Sir Paul McCartney and Heather Mills to serve as their private chef while they vacationed at Lake Tahoe. McCartney thrilled patrons of the Truckee restaurant by joining the nightly jazz musicians for impromptu performances.

A regular at Tahoe’s Autumn Food and Wine Jubilee, Estee is the first to push Tahoe’s culinary landscape as fast growing, “There are so many great restaurants opening here and the classic Tahoe joints give us a great charm,” said Estee. “It’s only natural for us to grow along with the Tahoe community.” In 2003 he was dubbed the best chef of Tahoe in a “Blazing Pans” cook off. Estee loves the competition and showmanship coming from this new era of culinary entertainment.

Through his career, Estee’s enthusiasm, leadership, passion and dedication have led him to stage in some of America’s best kitchens, including Gary Danko, Lespinasse and Chez Panisse. After graduating Johnson & Wales University in Providence, RI, he worked at two small high-end restaurants: Pot au Feu and Café Luigi. From there he joined Hyatt Hotels working first in Boston then Lake Tahoe, where he was executive sous chef and chef de cuisine at the Lone Eagle Grille. Prior to opening Moody’s, Estee was executive chef of the exclusive Lahontan Golf Club community.

Estee is always the first to donate his time and tantalizing meals to various community and non-profit causes and he serves on the board of directors for Project MANA, the local service that deals with food, education and helping the community. He keeps a busy schedule with private cheffing, catering gigs, sponsoring products and being very active in the community. He is most comfortable working the line and cleaning the walk-in after a long day and busy night.