Home » Blog » Outside » Mountaineering » Look. Up in the sky! It’s a Pelican! A Pelican?

Look. Up in the sky! It’s a Pelican! A Pelican?

You may have seen them lately because they’re only here in the Spring.

Big white birds, flying in perfect formation high in the sky. Lake Tahoe is in the migratory path of pelicans headed for Pyramid Lake, Nevada.

These pelicans are quite large, often mistaken for geese. Look again. […]

Read More… from Look. Up in the sky! It’s a Pelican! A Pelican? 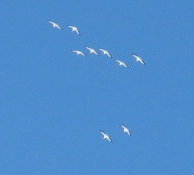 The American White Pelican, pictured here, nests on Anaho Island in Pyramid Lake during the spring and summer. (California pelicans that live on the coast are Brown Pelicans.)

They fly east over Lake Tahoe in the spring en route to Pyramid Lake, and then we see them flying over to the west in the fall, back to the coast.

Over the last month, the migrating pelicans have been seen flying over Desolation Wilderness near Emerald Bay, above Squaw Valley, and at East Cove in South Lake Tahoe.

Pyramid Lake, a 125,000-acre desert lake, lies at the terminus of the Truckee River approximately 30 miles northeast of Reno. The lake, a remnant of Pleistocene Lake Lahontan, contains a number of tufa formations including Stone Mother  and Anaho Island National Wildlife Refuge, site of one of the largest nesting colonies of the American White Pelican in the United States. Widely acclaimed as North America’s most beautiful desert lake, it’s actually the world class fishery that has brought Pyramid Lake worldwide fame. Pyramid Lake is the only habitat in the world for the Cui-ui fish that has been around for over 2 million years. The Pyramid Lake fishery includes the famous Lahontan Cutthroat Trout that have grown to record sizes and have lured fisherman from around the world over for several decades.

So, what is the difference between a brown and white pelican?

The brown dive from high and fast crashing down and stunning the fish. The brown hunts/feeds by itself, while the white is part of a group hunting effort. The white encircle groups of fish in shrinking concentric circles, thus corralling and dizzying the prey and then they all feed on the combined effort of their labor.