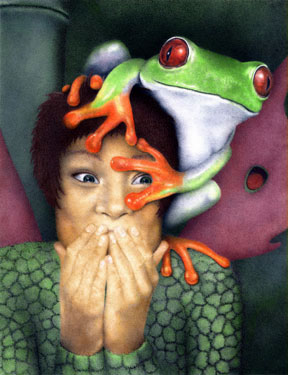 The magical and insightful world of frogs.

Frogs are one of nature’s headline bands signaling change.

All of Kristen’s illustrations have powerful intention. To teach. To inspire. To raise awareness.

In her own words:

In the past, the sound of frogs on a hot summer night has transported me to magical fairytale lands and thrilling memories of catching a glimpse of frogs as a child.

These days frogs are a heavy reminder that something is going wrong in our environment. Around the world frogs are appearing with deformities or disappearing, like the yellow-legged frog of the Sierra Nevada.

I couldn’t imagine a world without frogs. They are the unlikely heroes and magical comic sidekicks in so many stories, not to mention the start to a myriad of childhood adventures. I think that’s why I love to hear them so much. They seem comical, serious, magical, and absurd all at once – perhaps a little bit like us.

The illustration, Tree Frog Faery, celebrates the magic of the frog. Hopefully we will pay attention to the message that frogs are telling us about our environment. They could save our kingdom after all.

The back of the Tree Frog Faery notecard says:

Tree Frog Faery is just one of the many endangered wonders of the rain forest that is often overlooked. I, for one, would rather live in a world with faeries and tree frogs than in a world with no magic at all.

So next time you hear a frog in Tahoe listen up.

To learn more about Kristen and her illustrations, visit www.faerymed.com.