Life in the Slipstream by Andrew Homan 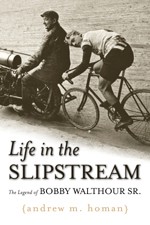 “A fantastic look at one of American cycling’s Golden Age greats. A fast-paced read full of harrowing detail of a life lived on the edge. Definitely a book that will appeal far beyond cycling circles. I loved it.”

Meet Andrew Homan, author of “Life in the Slipstream: The Legend of Bobby Walthour”.

Although little known, in his day Walthour was one of the highest-paid athletes in the world. His professional cycling career began in Atlanta in 1896, and he went on to became world motor-pacing champion in 1904 (London) and 1905 (Brussels). Tracks in Germany sold out 50,000-seat stadiums when he raced. In the United States, Walthour won the 1901 and 1903 editions of the great six-day race at Madison Square Garden, and he was also the 1902 and 1903 American champion motor-paced champion.