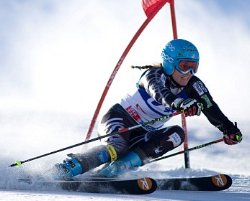 Congratulations to our local Lake Tahoe and Truckee athletes who will compete in the 2010 Winter Olympics at Vancouver February 12 through February 28, 2010.

Hannah is the defending Women’s Halfpipe gold medalist from the 2006 Olympic Winter Games in Turino, Italy, and hopes to have a repeat performance in Vancouver. Hannah rides for Sierra-at-Tahoe.

Hannah wrapped up the 2009 winter season with a second overall finish at the inaugural Winter Dew Tour, a first place finish at the U.S. Grand Prix event, and a third place finish at the Winter X Games 13. Her most recent accolade, however, is the tastiest – Ben & Jerry’s named their newest flavor Maple Blondie in Hannah’s honor. It is the first flavor named for an athlete and for a female.  A portion of the ice cream sales will benefit Hannah’s Gold which is Teter’s charity that she created in 2006. While she has been sponsoring the village of Kirindon with the production of her maple syrup for over two years, in 2009 Teter did something new by donating every piece of prize money she earned to the village in order to benefit the people there with water filtration systems and the promise of further growth. In 2010, the halfpipe superstar plans to continue donating her prize money to Hannah’s Gold in order to finish the water project and begin a new task that will improve the quality of life in Kirindon.

Elena Hight rides for Northstar-at-Tahoe and is known for her high amplitude and high style pipe runs. She is the first woman snowboarder to land a 900 in competition.

Hight was the youngest female snowboarder to compete in the 2006 Olympic Winter Games at age 16, where she placed sixth in the Halfpipe. She continues to be a top competitor in Halfpipe competitions, and in 2008 placed first in the Vans Tahoe Cup Halfpipe, as well as first in the King of the Mountain Halfpipe. In 2007, Hight placed first in the Vans Tahoe Cup, third in the Winter X Games, third in the Mt. Bachelor Grand Prix and second in the Breckenridge Grand Prix Halfpipe contest.

Thanks to her father Mike, Hight stepped on her first snowboard at age 6. She was then competing in local events when she was 8. The progression pipeline worked its magic and landed the pipe star at some of the biggest competitions in the world before she could even drive a car. At Vancouver she will compete against home time rival Hannah Teter in the Women’s Halfpipe.

Julia Mancuso is a product of the Squaw Valley race program and won the giant slalom at the 2006 Olympic Winter Games, and backed that up with a silver medal in the super combined at the 2007 World Championships. A quick starter, Mancuso was on skis at 2, racing competitively at 8 and on the World Cup circuit at 15. She was a NorAm champion at 16, an Olympian at 17 and an Olympic gold medalist at 21. Her older sister, April, joined her on the 2000 USA Development Team. Mancuso also suited up for the soccer and track teams at North Tahoe High School.

In 2008, she climbed Mount Kilimanjaro to raise $30,000 for Right To Play, the athlete-based charity earmarked to aid underprivileged areas of the world, and most recently she is bidding off her race bibs to raise money for the American Red Cross for relief efforts in Haiti.  Julie grew up in North Lake Tahoe and now lives in Hawaii where she loves to surf and stand up paddle.

Marco Sullivan was born and raised in Tahoe City, and was on a ski hill from his earliest memory, gliding down a snow-covered gravel hill in his backyard at 3. He learned to go fast on some of the gnarliest terrain at Squaw Valley as a member of the Mighty Mite program and was a promising four-event skier. Marco was a bronze medalist in slalom at the Junior Worlds in 2000 before he started to concentrate on downhill.

At age 18 he qualified for the U.S. Ski Team and never looked back. He won the 2001 NorAm overall, DH and super G championships and was in the Olympics a year later before winning his first World Cup in 2008.  At age 21, he placed ninth in the 2002 Olympic downhill and is on target to podium in Vancouver which will be his third Olympic appearance.

Known as the most successful U.S. male downhiller, Daron Rahlves retired after 13 years on the U.S. Alpine Ski Team following the 2006 Olympic season. Looking to continue skiing he made a transition into big mountain free skiing and ski cross comps. It wasn’t long before Rahlves, who had 12 World Cup wins, 28 podiums, and was the winner of the famed Hahnenkamm Downhill in 2003, decided to get back in the gate. This time, he opted for side-by-side mayhem with other skiers in a motocross-like event on skis. Now it’s ski cross and it’s the newest Olympic freestyle event for Vancouver 2010.  He will be competing against local rival from Truckee, Errol Kerr who will be skiing for the Jamaican Olympic Team.

Growing up in Northern California, he spent winters at Lake Tahoe and summers at Clear Lake, and snow skiing and water sports became one of Rahlves’s many strong suits. At the age of 12, Rahlves’s family moved to Tahoe so that he could focus on competing. He became the Expert World Champion in 1993 and that same year was named to the US Ski Team.  Today, when not competing or training Daron keeps busy building a spec home in Truckee and is an advocate of youth sports and a member on California’s Governor’s Council on physical fitness and sports. He loves to motocross and surf and is the skiing ambassador at Sugar Bowl Resort and a free ski athlete in Rage Films and Warren Miller Entertainment.  Daron also joined the restaurant biz and became a partner in Moody’s Bistro and Lounge in Truckee.

Inspired by early snowboard movies with Sean Farmer hucking himself off the Fingers of KT-22, Nate Holland moved to Squaw Valley in 1999.  Eleven years later, Nate is headed to the 2010 Winter Olympics in Vancouver once again to compete in the Snowboard Cross.

Nate’s first job on the mountain at Squaw Valley USA was as a Lift Operator. Nate had competed in Freestyle snowboard events like Half Pipe and Big Air along with Boarder Cross since making the big switch from 2 boards to 1 when he was only ten. It was not until three years ago, when the International Olympic Committee announced that Boarder Cross would be an official event in the Olympics that Nate put all his eggs in the Boarder Cross basket.

Nate has been busy dominating the Boarder Cross circuit which has earned him a spot on the US Olympic Team. Nate won Snowboarder X at the Winter X Games three years, 2007-2009. Nate also competed in the 2006 Nagano Olympics where he placed 14th. He’s got his eyes on the podium in 2010. 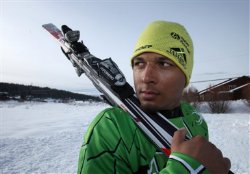 Errol Kerr from Truckee is a dual citizen of the United States and Jamaica, and has been representing Jamaica in World Cup ski-cross competitions leading up to the 2010 Olympic Games, when the event makes its Olympic debut. And what an event it will be. Errol will compete against local ski rival Daron Rahlves in the Olympic Ski-Cross event on February 21, 2010.

Errol has lived in Truckee since age 11, where he began alpine racing with Far West Skiing. Kerr, who was born to a Jamaican father and an American mother, has felt right at home on the slopes ever since he was a child. His mother, Catherine Kerr, once a ski racer herself, imparted the same love of the sport to her son when he was four years old.

Motivated by a desire to honor his father who died when Errol was 12 years old, Kerr gained International Ski Federation approval in 2008 to ski for Jamaica. He is the only member of the Jamaica Ski Team that is based out of Alpine Meadows.

The Squaw Valley Ski Patrol Avalanche Rescue Dog Team was the only invited team from the US to help in search and rescue operations at the 2010 Vancouver Winter Olympic Games. 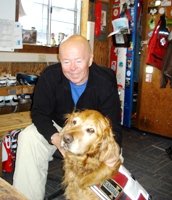 Four dogs and four handlers were invited since they’ve trained with and met the high standards of the Canadian Avalanche Rescue Dog Association for years. The elite team and their handlers include:

♥ Will Paden, handler, and Rasco, a golden retriever

The team will also be representing Squaw in honor of the 50th anniversary of the 1960 Squaw Valley Winter Olympic Games.