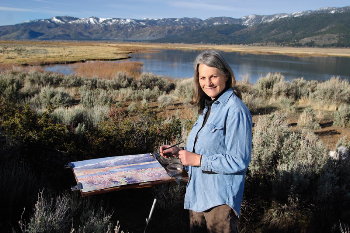 Becoming one with nature is the main goal and inspiration behind of all of Lady Jill Mueller’s art works.

Since the 1980s, Jill has composed her painting workshops with the eye of the observer on nature; always creating an experience for the viewer to also feel this connection to nature. Lady Jill inspires her students to find their own union with the natural landscape and express this connection through their own work.

Lady Jill was born in 1944 in Los Angeles, California. From an early age she was influenced by her mother, also an artist and the art community of Laguna Beach. She took every art course throughout her early schooling years, and then went on to major in art at several southern California colleges. During these years she was awarded a scholarship to the Laguna Art School.

As she grew up, Jill was always drawn to the peacefulness of being in nature. Moving away from southern California in 1971 allowed her to explore the Sierra Nevada mountains that she grew to love. In 1983 Lady Jill moved from California to the eastern Sierra, to live in Nevada close to the great, rugged mountains. 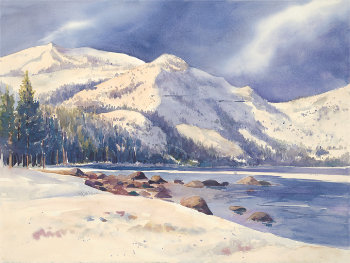 In 1980 she began to teach watercolor both to private students and during plain air watercolor workshops throughout the eastern Sierra. In 1993 she had her first class at Blackcraig Castle in Scotland and has been teaching there once or twice a summer since. Annually she teaches in Virginia City, Nevada and Rock Creek and Hope Valley, California. Occasionally she offers classes at her studio.

Lady Jill’s painting philosophy is based on her love of nature – being there as one, allowing the world to go by – hence she almost never puts people in her paintings, as she wishes the viewer to be the only one there. So many of Lady Jill’s paintings have found themselves on city home walls. “I feel blessed with the knowledge that so many have my life’s work to enjoy and pass on to their loved ones”.