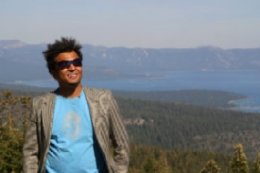 They may have just one member, but the Jamaica Ski Team (Errol Kerr that is) has made Alpine Meadows its training grounds for the 2010 Winter Olympics in Vancouver, February 12 – 28, 2010.

Errol Kerr, 23, has taken the ski cross world by storm and has officially qualified for the Winter Games.

Kerr, a dual citizen of the United States and Jamaica, has been representing Jamaica in World Cup ski-cross competitions leading up to the 2010 Olympic Games, when the event makes its Olympic debut.

And what an event it will be. Errol will compete against local ski rival Daron Rahlves in the Olympic Ski-Cross event on February 21, 2010.

Errol has lived in Truckee since age 11, where he began alpine racing with Far West Skiing. Kerr, who was born to a Jamaican father and an American mother, has felt right at home on the slopes ever since he was a child. His mother, Catherine Kerr, once a ski racer herself, imparted the same love of the sport to her son when he was four years old. 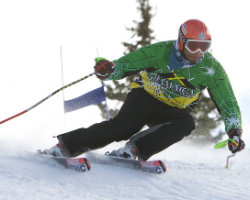 Motivated by a desire to honor his father who died when Errol was 12 years old, Kerr gained International Ski Federation approval in 2008 to ski for Jamaica. He is the only member of the Jamaica Ski Team that is based out of Alpine Meadows.

Throughout the ski season you can see the team – I mean Errol – train at Alpine Meadows. Click here for his schedule.