Into the Landscape: Vistas and Visions by Phyllis Shafer 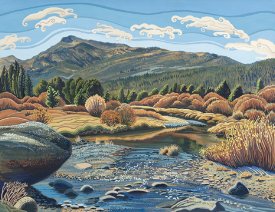 South Lake Tahoe artist Phyllis Shafer shares her personal explorations of her Sierra Nevada surroundings and the Sonoran Desert in her new oils and gouaches entitled “Into the Landscape: Vistas and Visions”.

Phyllis Shafer is a plein-air painter, working directly from the rugged natural environment she observes, in a style that has been described as “idiomatic magical realism.” Saying that she believes “that a kind of transcendental essence lies at the heart of all natural forms and objects,” she strives “for the immediate, intuitive expression of a subject’s essential nature.” 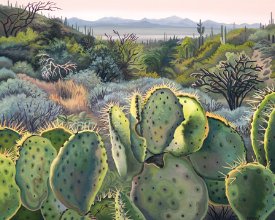 Her compelling, poetic paintings of the rugged landscapes she studies articulate her desire “to distill and crystallize” the “essence and the vital rhythms that animate it.” The use of slightly exaggerated perspective, expressive brushstrokes and repeated patterns help to reveal the inner spirit of her subject.

Phyllis Shafer received her M.F.A. from University of California, Berkeley in 1988, and is a full-time instructor in painting, drawing, design, printmaking and art history at Lake Tahoe Community College.

She has shown widely throughout the region, including Sacramento’s Crocker Museum, and the Nevada Museum of Art. 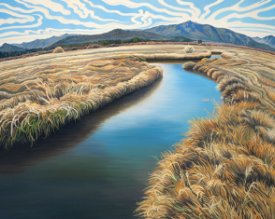 In 2006 she was invited to participate in Los Angeles’ Autry National Center’s traveling exhibition, “Yosemite: Art of an American Icon, Part II: 1970-Present.” Her works may be found in numerous private and public collections, including Renown Medical Center and the Nevada Museum of Art. 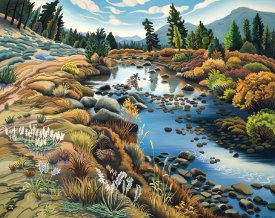 Late Autumn along the Carson