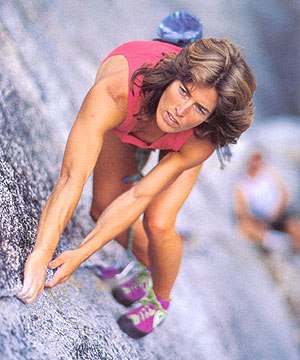 Hill is acknowledged as one of the most accomplished rock climber in the world. Having learned to climb in southern California in 1975, Lynn was part of a cutting-edge generation of free climbers known as the “Stone Masters”. In 1983, Lynn moved to upstate New York and continued to raise the standards in free climbing, as well as in arena of international climbing competitions.

However, her most notable achievement came after retiring from the competition scene. Lynn’s first free ascent of the Nose on El Capitan in 1993, followed by her one-day free ascent of the Nose in 1994, remained unrepeated for over a decade and helped define the modern era of free climbing. Writer Jon Krakauer summed it up: “Lynn Hill isn’t just one of the best female climbers in the world, she is among the greatest rock climbers of all time.”

Climbing Free is the story of how Lynn has evolved as a person, as well as her experiences with many of legendary climbers from all over the world.

Having traveled to various climbing destinations throughout Europe, Vietnam, Thailand, Morocco, Australia, Japan, Kyrgyzstan, Cuba, and China, Lynn has a unique perspective of the evolution of climbing across the globe.