I ♥ Firefighters by Melissa Lanitis Gregory 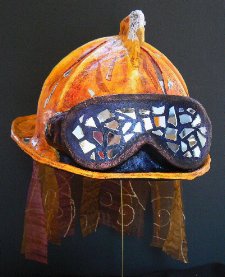 At their core, these helmets are based on community.

Melissa began each fire helmet by layering local newspapers, one containing the story of Rick Gunn’s return to Tahoe, on top of an actual fire helmet borrowed from the fire department. Fifty percent of the layers are created using the recycled paper. The pieces are finished with other papers for strength and texture.

“Watching the fire burn, I had this sense of helplessness. There wasn’t much any of us could do but donate clothing. But I remember watching the helicopters dipping into Lake Baron and hollering my thanks up to the pilots… I felt so much gratitude. These helmets are an homage to those people whose job it is to run into a burning forest armed with the courage to fight fire.”

Both helmets are decorated with strips of newspaper clippings from Angora Fire articles. According to Gregory, “‘Reflected in Flames’ (above) represents our strength as a community, as it was mirrored back to us by all of the firefighters who came to help out.”

“Warning: Firefighting is an Ultra-hazardous Activity” (left) is so named because of the warning on the inside of the actual borrowed helmet. Melissa’s helmet includes the warning around the outside edge. “It goes on for a bit. You read that warning and think, no way am I putting that thing on and running into a wall of flames!” But these people do.” says Melissa.

“Reflected in Flames” (above) 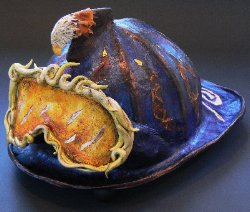 “Warning: Firefighting is an Ultra-hazardous Activity”

Leaving her Assistant Art Director job in New York City for a waitressing job in Tahoe seemed like a no-brainer. After years working in the local graphic design/advertising industry, Melissa was given a book on the art of papier mache, and has been creating unusual pieces ever since.

Melissa is also the master-mind behind the lake-wide community art show, Tahoe: Lost & Found, and has just launched her writing career to complement her amazing artistic talents.