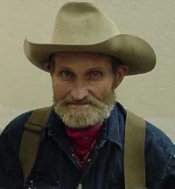 Who was Jim Hawksworth?

While Jim passed away in 2002, his legacy lives on as a person.

The historic Upper Truckee Pack Station near Meyers, California has been officially dedicated in honor of legendary Forest Service backcountry horse packer Jim Hawksworth, who passed away in 2007 as “Hawksworth’s Packstation”.

For nearly three decades, Jim Hawksworth led his horses and mules through the backcountry and wilderness areas of the basin, maintaining trails and caring for the mountains he loved. Hawksworth became a familiar sight on the trails to many backcountry regulars. For those who saw him for the first time leading his string of pack mules, they were often left lost for words. He seemed to ride out of the past; appearing from the rocky trails as though he was born from them, then fading once again into the stones and trees. A quiet, dedicated and hard-working man, Hawksworth sought no recognition or notoriety. His life and his work were one and the same. After Jim passed away last December, Don Lane, Recreation Forester and Wilderness Program Manager for the Lake Tahoe Basin Management Unit noted: “He found a lifestyle he embraced. You would talk to him about every trail in the backcountry, every rock, and he would know them,” Lane said.

Put Jim Hawksworth in a city and he’d probably tell you it’s like wearing Sunday school clothes that shrunk in the wash.

For the past 34 years, Hawksworth has felt most at home many miles from any roads, phones or Kmarts.

In fact, much of his life is spent in a place where landscapes have not changed since the last glacier passed through – the backcountry of the Tahoe Basin.

An employee of the U.S. Forest Service, Hawksworth has been a “packer” since 1963. Backpackers often spot him, his assistant Buck Browning, and a string of horses and mules heading into the wilderness to maintain the area’s thousands of miles of trails.

“Hikers stop to ask him if he’s for real,” said Hawksworth’s supervisor, USFS Recreation Forester Don Lane. “You bet he is – he’s a mountain man in every sense of the word. Jim is at home spending week after week in the backcountry. There’s still a place in this modern world for packers with woodsmen’s skills and pack stocks.”

Designated wilderness areas throughout the United States forbid the use of mechanized or motorized equipment, said Lane, except during emergencies. For that reason, Hawksworth’s skills are still very much in demand – as are the mules and horses that carry heavy equipment far into the backcountry.

“Jim and Buck need those animals – all trail maintenance is done by hand,” said Lane. “They cut up downed trees that are five to six feet in diameter with a 5-foot crosscut saw. They can spend weeks in an avalanche area rolling trees and boulders off the trail.”

A tourist who once encountered the pair asked Hawksworth if he was a volunteer senior citizen.

Although the 63-year-old says he can’t imagine being in another line of work, he does occasionally emerge from the high country for one main reason – his wife, Donna.

“The only difference between a man being a savage and a gentleman is having a lady around,” said Hawksworth with a chuckle and a glance at his spouse of 40 years. “I like it when she goes with us into the backcountry – that way we’ve got a cook and my sleeping bag’s not all full of pinecones and stickers.”

The playful banter between the two Hawksworths is evidence that they share a love for a rustic, simple life.

“I sure wouldn’t have married Jim if I didn’t love the mountains,” said Donna. “We camped out at Gilmore Lake when our son was 6 weeks old. It snowed – he was the warmest one there.”

When not in the backcountry, the Hawksworths spend June through September in a platform tent next to an old 1918 U.S. Forest Service ranger station in Upper Lake Valley. Their 1948 stock truck is parked close by, awaiting the next trip to the trailhead.

An occasional snort or whinny can be heard from the horses and mules tethered in a nearby aspen grove.

“Mules are just like people – the young ones are cranky and the older ones are gentle,” said Hawksworth. “The older we get the less frisky we are.”

Winters are spent at the Hawksworths’ home – far down a dirt road outside Mariposa, Calif., where they have an outhouse, no running water and “a crummy gold mine that never produces any gold.”

But as long as he’s able to stand, Hawksworth said he plans to spend summers repairing Tahoe’s trails.

“I’ve learned volumes from Jim,” said Browning, who hopes to follow in Hawksworth’s footsteps. “About all I could do was tie a mean bowline before I met him. Now I’m learning all the horse crafts and how to run a pack string – I have a great respect for the lifestyle.”

“No one knows Desolation Wilderness better than Jim,” said Lane, a seasoned backcountry ranger himself. “He knows every bend in the trail.”