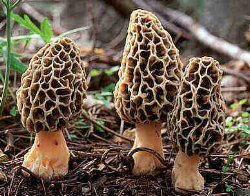 You may have seen them lately.

They have that glazed look.

The people. The Morel mushroom hunters.

While many people are at the beach, the Morel Hunters are out in the woods. They say the Morel Mushroom is very, very hard to find making the hunt even more addictive.

They admit they are obsessed, and say it’s a proven brain disorder. Called Morchella Oblongata – an abnormality of the brain which causes impulsive behavior and restlessness, especially in the Spring.

Symptoms include frequent trips to the woods and incessant discussion of mushroom hunting. There’s no cure (they claim), and relief can only be achieved by finding and eating Morel Mushrooms.

Spring is usually peak season for Morel Hunting, but it all depends on the moisture. But, don’t count on a morel hunter giving up the location. Giving up secrets means banishment from mushroom hunting circles … or worse.

Although there are plenty of websites about morels with gobs of recipes and fun facts, you won’t learn where to find these elusive fungi delicacies.

There are all kinds of ways to prepare morels – gourmet and some not. Fried morels. Cream of morel soup. Fettuccine Alfredo with chicken and morels. Sauteed morels. You name it. Grab a skillet, some garlic and butter. Or throw them on the grill. 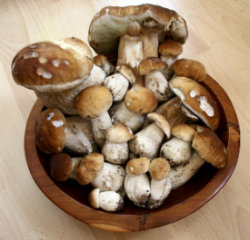 While morels are king in the spring, another local mushroom that peaks in the late summer and early fall is the porcini. While these large mushrooms are easy to spot, you’ll have to find them on your own. Mushroom hunters are a very loyal bunch.

A handy field guide is All That the Rain Promises and More by David Arora. It lists most of our common mushrooms and fits in a pocket.

CAUTION: Identifying mushrooms is serious business. Eating poisonous mushrooms will kill you. Pretty quickly too, so be sure to identify every mushroom before you eat it.

Or it may be your first. And Last!