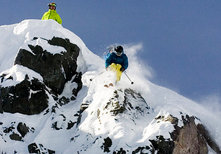 Skiers and snowboarders worth their salt have certainly descended an expert-rated run, naked, while simultaneously talking on a cell phone with their mom; however, this act has rarely been captured on film as well as it has in the new movie, G.N.A.R.

What started as a game featuring 20 riders vying for a winner-take-all purse of $25,000 has transferred into a film that’ll likely be dubbed “instant classic.” Edited by filmmaker Scott Gaffney, the movie stars a bevy of local skiers and snowboarders including Ralph Backstrom, Chuck Mumford, George Hjelte, Greg Lindsey, Spencer Cordovano, Mattias Sullivan, Kevin O’Meara, Alex Cox, and Dr. Robb Gaffney; and features archived footage of the inventor of the game and inspiration for the movie, Shane McConkey. On-camera interviews with the Gaffney brothers, Mrs. Sherry McConkey, and renowned photographer, Grant Kaye, set the bar for what is sure to become the ski and snowboard industry’s all-time funniest movie.

G.N.A.R. the movie was inspired by G.N.A.R. the game. Included as the final chapter of the book, Squallywood (penned by ski legend Robb Gaffney), G.N.A.R. was written by the late great Shane McConkey as a way to simultaneously celebrate and make a parody of skiing and snowboarding’s most treasured holy grails: hilarious antics, shellacked bravado, embarrassing your friends and yourself for a laugh, good-natured competition, and of course, naked skiing.

Also consistent with the game, G.N.A.R. documents some of the west coast’s most coveted steep lines and deep powder stashes guaranteed to resonate through the audience.

G.N.A.R. is intended for mature audiences, due to nudity (albeit good natured), the “s” word (used 79 times excluding opening credits), and a few acts which have resulted and will continue to result in arrest (please do not scale the wooly mammoth statue at a certain central California resort). Those who have aversion to snowlerblading or monoboarding should also not attend. Movie-goers can look forward to delicious beverages presented at the Alpine Meadows lodge, with names honoring various attributes of G.N.A.R., the game.